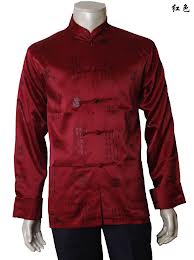 Interested in the traditional costume worn by men in China? Read on for information on the national clothes worn by Chinese males…

The traditional style of dressing in China is unique to say the least. Chinese dresses for men and women are renowned for their elegance and the innate symbolism that they bear. Traditionally Chinese dresses can be classified into two groups; the one piece dress which was worn by the men and the coat and skirt dress wore by the women.

This ancient traditional one piece dress has been present in the Chinese culture for centuries. It starts from the shoulders and extends all the way to the heels. The dress, although known for its elegance, had a very loose fit on the body.

Another characteristic feature of this Chinese dress for men is the voluminous sleeves. They were made using a lot of cloth and were extremely wide. The patterns and design of the dress was extremely simple. One of the most unique features of this dress was the fact that it made use of minimal stitches despite the fact that it was made using a lot of cloth.

The Chinese would make use of various fashion accessories in order to add some color and vibrancy to the dress. The use of sashes, draped cloth, decorated bands, embroidery and patterns were some of the elements used to enhance this dress for men.

Men would generally wear darker colors and their clothes would be far less decorative as compared to women’s dresses. Bright colors would often be used on the accessories in order to create a contrasting element that would enhance the appearance of the dress.

The traditional ch’ipao is back in fashion amongst the women of China. This was a dress popular with the women during the Ching Dynasty. It was a special dress that the women would wear on formal occasions.

Much of the Chinese dresses worn by women today are actually modernized versions of traditional dresses of China. The most prominent example is the qipao dudou. This was an undergarment that covered the entire area of the chest and abdomen which would be covered by a jacket. The dudou was actually worn as an undergarment back in time but today it has become a popular trend amongst the women of China.

Fashion designers have also brought the modified cheongsam back in fashion. This is a one piece body hugging suit that has become extremely popular amongst the women. The mandarin gown is also another traditional dress which has been revamped and reintroduced to the public. Women on the streets can also be seen sporting Chinese style coats with low straight collars, embroidery patterns and coiled buttons.

China
Interested in Chinese clothing for men? Find out about the dress sense of Chinese

China
Interested in the Modern Chinese dress? Find out about the modernized versions of traditional