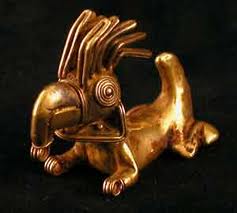 Pre Columbian Tumbaga is the name given to non-specific copper and gold alloy. Read our guide below for more facts and information…

Pre Columbian Tumbaga was found by Spaniards and is in much use in Columbian South America and Mesoamerica.

Tumbaga was used for making religious objects in Central America. As many gold alloys, it could be cast, hammered, drawn welded, hardened, engraved, embossed, polished and inlaid. Proportions of copper to gold used in artifacts differ widely. Different items were found using 97% gold while some contain 97% copper. Tumbaga have also been found containing metals other than copper and gold up to 18% mass.

The Tumbaga objects were normally made with the mixture containing copper (80%), gold (5%) and silver (15%). But this ratio varied in different objects. On taking out the object from cast, it was burnt, due to which copper on the surface was oxidized and removed mechanically. The item was put in oxidizing solution probably containing sodium chloride and ferric sulfate. In this manner, silver was removed from surface of object leaving just gold. On looking through a microscope, empty spots from which original elements of silver and copper were removed could be seen clearly.

Before coins were discovered, Spanish Treasure Fleets were established, and in fact, even before any type of colonies were established in Spanish Main, Hernam Cortes, the conquistador, along with his men located treasure gold as well as silver artifacts of native – America. It is a pity that these artifacts do not exist now, but their one time existence is confirmed by “tumbaga” bars. These are over 200 gold and silver ingots, which were discovered in remains of unidentified ca.1528 shipwreck near Grand Bahama Island. These artifacts were placed in two piles – having gold-colored and silver-colored artifacts. These had a lot of impurities. These piles were melted and poured in crude molds, which sometimes were like depressions in sand. Resulting ingots were known as “tumbaga” bars and were stamped having four types of marking indicating Bernardino Vasquez, their serial number – normally letter R and Roman numerals, fineness and tax stamp, a circular seal of Charles V of Holy Roman Empire.

About two hundred “tumbaga” bars were located in the wreckage near grand Bahamas Island. These were of silver, gold and copper that had been captured by Spaniards during various conquests and quickly melted into tumbaga bars for carrying across the Atlantic. Since all metal reaching Europe were melted to actual metal, bars found in shipwreck are the ones remaining now. A book written by Douglas Armstrong in 1993 describes each bar in detail. He was also a professional conservator who had been hired by Salvage Companies for cleaning and preserving all silver.