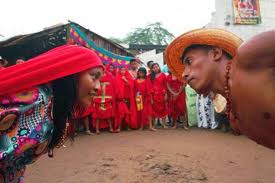 Yonna is a beautiful traditional dance of the Guajira Peninsula of Colombia, and it symbolizes the cultural heritage of the Wayuu ethnic group. Read our guide for more facts and information…

Dances are invariably associated with culture and tradition of various civilizations, ethnic groups and countries. Traditional dance and music have been passed down generations, and most cultures and communities still retain them, and host them during special occasions and festivals.

The origin of Yonna dance

Cabo de la Vela is a mythological place located in Guajira, Colombia, and is said to have the house of Mareywa or the God of Wayuu. There is also a myth that it has a natural pool where the Wayuu can communicate with ancestors. Though it holds its own secrets, its complicated Yonna dance has spread out to some extent. Also called Chicha Maya dance, it is performed for a chain of events; the events include grain harvest, abundance of harvest, thanks to the creator, and better crops in the next harvest.

Uribia, which was the capital of Guajira for some time, is a twentieth century city, where a three-day festival, called the Festival De Cultura is popular. It attracts participants from Venezuela as well as Colombia for the dance, which involves the use of traditional instruments like kayu (drum), totoroy (flute) and wahawai (wind instrument). The festival culminates with the election of a Majayut (queen), who is expected to be well-versed with the Wayuu traditions.

It is also considered as an authentic folkloric Zulia, besides symbolizing basic attributes like quest for social stability, solidarity and the connection between humans and cosmos.

Description of the Yonna dance

Yonna is performed by couples, and the man begins the dance, extending an invitation to the woman with an exclamation. The kasha, along with mimics of the Wayuu sounds, marks the start of the celebration.

Throughout the dance sequence, the woman keeps chasing the man to the drum. She holds an open blanket on both hands and the man keeps moving back. Her move is set to pursue the man and do whatever is possible to push him to the ground. After that another pair takes their place, and if a man leaves without being knocked down, he is appreciated.

Women wear colorful attire called Ashein, with a scarf and adorn themselves with necklaces, gold bracelets, earrings and heavy anklets that sound while dancing. They also wear conspicuous makeup and straw baskets with colorful woolen tassels and peacock plumes or rooster feathers.

Men wear a white dress with cuffed wristband and a She’iy that has an opening in the middle and is sewn on the side. They may also wear sombrero cueltiao and corrosca (a hat), with a handkerchief about the neck, matchete and knapsack.

Though Yonna is a free dance, it comprises several sequences that are guided by the drummer, and Wayuu is said to be reunited through the dance actions that solidify and conserve their traditions.

Turkey
Want to learn more about the Horon Turkish dance? Read on for facts and