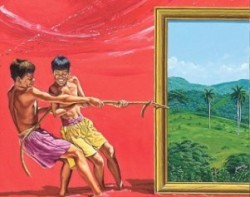 Are you interested in the art of Cuba? Do you want to experience some of the art of Cuba while on holiday in Cuba? Our guide to art in Cuba gives you the facts and information you’ll want to know about art in Cuba.

Cuba was not particularly known for its art prior to the revolution in Cuba in 1959; however, there has always been a steady trickle of artists from Cuba since the 19th century. Most pre revolutionary art in Cuba was highly influenced by European movements in art.  This is especially noticeable in the early 20th century art of Cuba because this was a time when many of the most well known artists from Cuba would travel to Europe and bring back influences that are apparent in art from Cuba at this period.

Since the revolution in Cuba in 1959 art and artists have gained a new social role. Artists are believed to be cultural ambassadors of Cuba and their art is meant to reflect the culture and society of Cuba. The government of Cuba has given special recognition to the role of art in Cuba, and although it’s unlikely that an artist in Cuba could ever get rich, artists in Cuba are provided with a guaranteed salary.

As part of the government of Cuba’s efforts to promote the culture of Cuba through its arts, several measures have been taken to upgrade the status of art in Cuba. Far from art being the reserve of the bourgeoisie in Cuba, the government of Cuba have made deliberate attempts to popularise art in Cuba and make art in Cuba accessible to all. Efforts to promote art in Cuba since the revolution include the opening of several art galleries, art schools and art museums in Cuba that are open to the public. In addition, theatre groups in Cuba have been promoted to develop the performing arts in Cuba.

Cuba has also invested in promoting the performing arts since the revolution in Cuba in 1959. Today the national ballet of Cuba is internationally renowned and respected and travels across the world to put on performances.

Deliberate efforts have been made to make art in Cuba more accessible to the public. This has resulted in much art being done on large billboards that are placed in public spaces so the public in Cuba can enjoy this art.