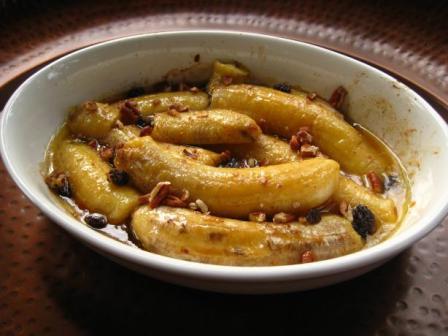 The Cuban banana casserole is a traditional and popular Cuban dessert which is traditionally served with vanilla ice cream. If you check recipes for this dish you will be amazed at how highly it is rated by Cubans and international fans of the dessert. This recipe always gets four or five star reviews by chefs and food connoisseurs alike.

You can have a delicious dessert and easy to serve meal ready within 40 minutes. Of course it will take a fraction of that time for your family and friends to finish it off. The recipe for the Cuban banana casserole using six bananas will yield eight servings.

Start by slicing six bananas lengthwise, take a half cup of light brown sugar, half a cup of unsalted butter which has been cubed in small pieces, half a cup of chopped pecans along with half a cup of sweet raisins. If you want to prepare a larger quantity then you simply have to double the recipe.

Now place the remaining banana on top of this seasoned layer to create a sandwich. Now sprinkle the remainder brown sugar, butter, pecans and raisins on top of the second layer of bananas. Place in the pre-heated oven and bake for approximately 30 minutes or till bubbly and the sugar has melted. Remove from the oven and cool it for five minutes so that the ingredients settle down.

To serve the Cuban banana casserole make sure you have a hot plate ready on the table. The casserole is extremely hot and you will require gloves to transport it from the oven to the table. Slice it in eight squares and transfer it onto the serving plate.

Now scoop out fresh vanilla ice cream on the side of the banana casserole square on the plate it is being served on. If required spoon some fresh cream over the hot banana for a truly delectable dessert.

For delicious homemade vanilla ice cream you require the yolks of four eggs, 250 mL of milk, 250 mL of double cream, a hundred grams of castor sugar and one pod of vanilla which has been sliced through the middle.

Heat the milk and slowly bring it to boil. Add the vanilla pod and let it infuse in the milk for 20 minutes. In a glass bowl mix together the egg yolks and sugar until it is thick. Remove the vanilla pod from the pan and scrape out its seed into the milk. Now pour the milk mixture into the egg yolks and sugar base while you stir it consistently. Pour this custard back into the pan and heat it gently till it becomes slightly thick. Cool this custard and then add  the cream. Pour it into the ice cream maker and follow the instructions on it to freeze the ice cream.