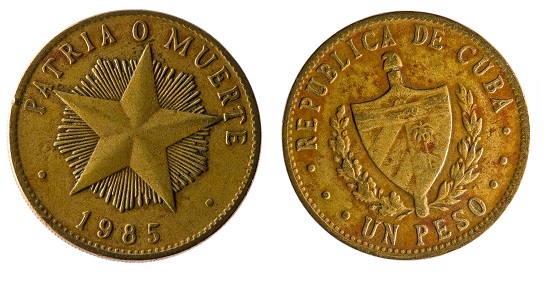 Want to learn more about the coins of Cuba? Read on for updated information on a specific collectible coin of Cuba and the history of Cuban coinage…

From authentic raw Cuban coins to the pesos of 1937, 1898 and the souvenir pesos along with the Republic of Cuba Arms issued 1870 series, Cuban coinage ranges from the colonial era all the way through the 1960s and include some of the most collectible pieces in the history of coinage.

One of the most popular Cuban coins is a 1915 Centavos, the designer of which is unknown. The coin comprises 90% silver with a 10% copper alloy and weighs 2.5 g.
This Cuban coin has a diameter of 17.91 mm and was minted in the United States in the state of Philadelphia. The total quantity of the mintage includes 125 proof pieces and 5690,000 coins in circulation in this category.

The 1916 1 Peso which has the Bust of Jose Marti is comprised of 90% gold and 10% copper alloy giving it a total weight of 1.67 g with a diameter of 14.7 mm. The mintage includes hundred coins for proof and there are approximately 10,600 Cuban coins of this type in circulation today.

The 1960 5 Centavos coin is comprised of 75% copper and 25% nickel alloy and was minted by Kremnica and Philadelphia. This Cuban coin weighs 5 g and has a 21.21 mm diameter and there are approximately 20,000,000 coins in circulation today.

The Souvenir Peso Type I, II and II Cuban Coins

The 1897 Souvenir Peso Type III is another popular Cuban coin weighing 22.55 g with a diameter of 36 mm. It was designed by Philip Martigny and minted by Gorham Manufacturing Company in New York, United States of America.

The 1915 20 Centavos was printed in low relief and has a coarse reeding. The designer of this coin is unknown and it consists of 90% silver and has a 10% copper alloy. This Cuban coin weighs 5 g and has a 23.27 mm diameter and was minted in Philadelphia in the United States of America. Approximately 125 proof coins exist today whilst there are 7,915,000 of the 1915 20 Centavos in circulation today.

The 1916 40 Centavos low relief star has an unknown designer and is made of 90% Silver and 10% Copper alloy. The total weight is 10 grams and this Cuban coin has a diameter of 29.06 mm when minted in Philadelphia. There were 50 proof coins and there are 188,000 of these Cuban coins in circulation. Cuban coins are graded on the numeric grading system which was created in 1970 by Dr. William H. Sheldon.