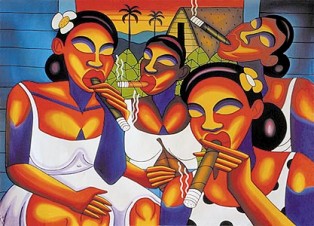 Interested in Cuban painting? Want to know more about Cuban colonial & landscape paintings? Our guide to Cuban painting gives you the facts & information you want to know.

Graphic arts serve to provide a visual representation of history, culture and traditions of a country. This is apparent through the influence that the surrounding environment has on the artist who strives to depict his expressions to the people. Painting in Cuba dates back to the time of the early cave paintings. As time moved on we find many myths and cartographies that were developed by the people of that time. The colonial period brought with it the trend of mural paintings that accompanied the architecture of that time. In general we can see a whole ascent in the quality of fine arts that has been produced by the people of this region.

The colonial period saw paintings flourish and many new techniques were developed in this era. The first Cuban graphic artist was Francisco Javier Baez who was known for his religious themes as well as advertising for tobacco and cigar brands. In these times many French artists came to the island and produced work based on their observation of life and nature of the region thus forming a wonderful visual representation that was true to the nature of those times. Cuba’s social structure changed considerably towards the end of the 18th century which resulted in many formalized institutions of the arts.

The first famous Cuban painting is said to have been done by Jose Nicolas Escalera who was the first to depict a Negro slave in a mural of the Church of Santa Maria del Rosario. Art was patronized during this ea and we can see that a lot of the paintings of this time had definite European influences. The Cuban national paintings are said to have flourished after a Cuban finally took over the Academy of arts who initiated many new changes in the academy. Slowly and gradually Cuba began to develop a taste for these paintings as the country began to develop on the intellectual planes.

The 20th century saw the establishment of the first real exhibition center by the name of Salon de Bellas Artes. This played an important role in the commercialization of Cuban paintings because now the artwork was open to the public. This era also saw much debate on the intellectual side between the philosophies of art. Many of these debates could be read in top class magazines. The museum of modern art opened up which showcased the work of the best of the painters at that time. It was clear from the work of these artists that they aimed at influencing the lives of the people by depicting changing trends and culture. Many new techniques such as serigraphy were developed in the beginning of the century. Victor Manuel of this era is known to have experimented with a lot of techniques. The painting style of the Cuban artist continued to become modernized during the 40’s and 50’s. This was much in line with the international trend at that time. Abstract art found its way into the art culture of the island. The trend that has carried on from the time of the revolution is that of propaganda art. On the whole Cuban painting & arts have seen an extraordinary boom since the days of the revolution.