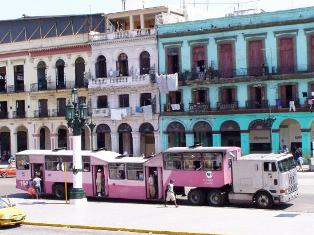 Are you travelling to Cuba on holiday? Want to know how to get around Cuba using the buses? Our guide to the bus system in Cuba gives you the facts & information you’ll want to know.

As a socialist government, the provision of public services, including buses, has always been a priority of the authorities in Cuba. Cuba has one of the best national bus services in Latin America. The first thing one might notice about the buses in Cuba is that they are quite old because US sanctions have made it difficult to purchase new buses. Nevertheless, the buses in Cuba are generally quite safe and reliable and a cheap way of getting around the Island of Cuba. There are two national bus operators in Cuba. The national bus company in Cuba is the larger of the two and designed to cater primarily for Cubans, while another smaller bus company serves tourists.

Travelling by bus in Cuba

The best time to travel by bus in Cuba is mid week when the buses are less crowded and you stand a better chance of getting a seat on the bus. Because buses are a popular means of transport in Cuba, they become especially crowded on weekends and public holidays when many Cubans travel back to their families.

Cuban nationals pay for their bus tickets in the local Cuban money, while tourists in Cuba will be expected to pay in dollars. Every bus in Cuba has four seats reserved for foreigners who pay in dollars. It is best to purchase your bus ticket an hour before departure from the local bus depot just to ensure your place on the following bus.

Carrying luggage on buses in Cuba

Most bus drivers probably won’t have a problem if you decide to take your luggage on board with you. There are, however, luggage compartments at the bottom of the bus and most people keep their luggage their. You will be issued with a ticket for your luggage when you put it on the bus, and you should be sure to hold on to this, as otherwise you’ll face difficulty reclaiming your baggage when the bus arrives at its destination.