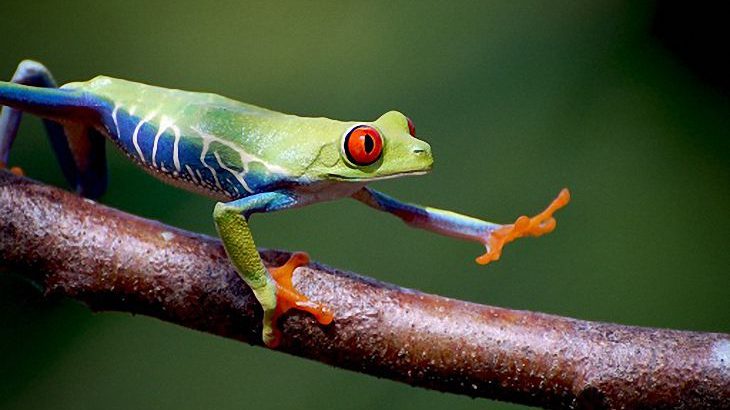 Cuban tree frogs are big: they measure up to 5 1/2 inches nose to rump. They are found in several different colors with and without stripes and splotches. While they are rather impressive species, they have damaged ecosystems into which they have bee

Cuban tree frogs, whose Latin name is Osteopilus septentrionalis are the largest frogs in North America, though the species is native to the Caribbean, specifically Cuba, the Bahamas, and the Cayman Islands. These frogs come in a variety of colors and a distinguishing characteristic of these frogs are their large toe pads, warty skin, and their large size. If you see a white tree frog, it is almost certain that it is a Cuban tree frog.

After having been brought to Florida from the Caribbean, the Cuban tree frog has managed to spread throughout the Florida peninsula where it breeds from May to October. They are also found in parts of Hawaii. They have been found in just about every conceivable environment: ponds, pools, drains, toilets, and birdbaths. There have been isolated reports of Cuban tree frogs showing up in South Carolina, Texas, and Georgia.

This species is considered invasive. It has a bad effect on native frogs, humans find them a nuisance, and they are able to short circuit utility switches and cause widespread power outages. Additionally, the mucus that a Cuban tree frog secretes can trigger asthma attacks or otherwise irritate the human nose or throat.

Cuban tree frogs can be anywhere from 3 to 5 1/2 inches long, and on many of them, the hidden surfaces under the legs are bright yellow. These patches are believed to confuse predators when the frogs hop away. Another odd characteristic of Cuban tree frogs is that their head skin is fused to their skulls. This adaptation prevents them from losing too much water because of the dearth of blood vessels in the fused area. The females are much larger than the males, and in summer males develop darker throat areas and “nuptial pads,” which are callus like pads on the thumbs. They help him hold onto the female when mating.

Cuban tree frogs eat just about anything that will fit into their mouths: small mammals, lizards, snakes, insects, mealworms, and frogs – including frogs of the same species. This frog is considered invasive where it has been introduced, and eats native animals such as frogs, lizards, and snakes and reduces biodiversity where it spreads, causing native tree frogs to decline in population. One way that the species spreads, incredibly enough, is “hitchhiking” on vehicles and ornamental plants. In isolated cases, they have been accidentally transported all the way to Canada.

Though Cuban tree frogs can be kept as pets, they are far from ideal in that regard. They require temperatures over 70 degrees Fahrenheit, or else they will hibernate. They need lots of mossy hiding places, and they make a loud noise similar to dogs barking in the wee hours of the morning. You can’t keep other frogs or really anything else with it, because they are known cannibals with ravenous appetites. Pet Cuban tree frogs should never be turned loose, but rather turned over to a state wildlife agency so that they do not escape into the wild and become invasive.