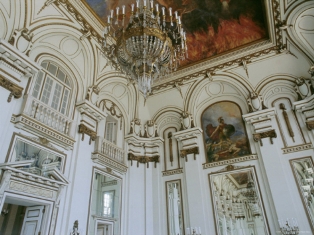 The promotion of Cuban culture and the appreciation of the arts in general, has been a key point in the agenda of the Cuban government since the revolution in Cuba in 1959. Today in Havana there is a multitude of interesting museums to visit pertaining to every discipline you can imagine. Below are just a few of the top museums in Havana Cuba.

The Havana Fine Arts museum in Cuba displays exhibits of art from both Cuba and Europe. The period of art works that this museum in Havana covers starts from approximately the beginning of the 18th century right up to modern day art.

A significant proportion of the population of Cuba are of African origins who have traditionally been the under class of Cuba. In keeping with socialist ideals, the revolutionary government of Cuba has sought to promote awareness and pride in the African origins of many of the citizens of Cuba. In addition,  post revolutionary Cuba has positioned itself as a third world champion claiming solidarity with anti colonial freedom struggles across the world, many of which were in Africa during the 60’s and 70’s. This museum in Havana houses several souvenirs that Cuban president Fidel Castro picked up on his visits to various African countries in 1977.  There is also a very interesting set of exhibits dealing with the history of Afro- Cuban religions in Cuba.

The Havana Museum of Colonial Art is located in Cathedral Square in the centre of Havana. This museum concentrates mainly on the Spanish colonial art that was influential in the history and development of Cuba. One of the highlights of this museum in Havana is a display of colonial Spanish furniture as would have been used by the ruling Spanish elite in Cuba in colonial times. Entrance to this museum in Havana costs $2 US for foreign tourists in Cuba.

As the name of this museum would suggest, it deals mainly with fossils found in various archaeological digs in Cuba as well as collections of floral life indigenous to Cuba. Entrance to this museum in Havana costs $2 US.