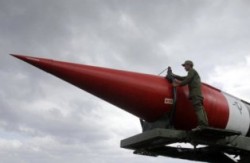 The crisis that put the world on a standstill lasted but a few days. But these days of the Cuban missile crisis were intense with the constant threat of the eruption of another blood bath after the two great wars. The memories of the great wars were still quite fresh and its consequences could still be seen in the regions that were most severely struck. Although a war was averted you can still feel a chill run down the spine when recalling the Cuban missile crisis timeline.

The Soviet Union had begun its secret deployment of nuclear missiles in Cuba but the event turned into a crisis when a U-2 reconnaissance aircraft spotted the activity on Monday, October the 15th. The President of the United States was informed of the situation that then set up his executive committee to analyze the options available to America. The first of three SS-5 IRBM sites in Cuba was identified on the 17th of October. On the 18th of October a meeting was set up between the president of the United States and the Foreign Minister of the Soviet Union. In it the Americans clearly stated that they would not tolerate any such activity in Cuba whereas the Soviet Minister denied that any such activity was taking place. After the meeting with the Foreign minister the Americans started to consider their military options with the members of the Joint Chiefs of Staff from the 19th of October. The next day President Kennedy returns to Cuba and the very same day the Soviet Union’s activity is confirmed in the Island because of their Dominic High Altitude test on a missile. As a result President Kennedy deployed a naval quarantine around Cuba on the 21st of October. The next day the big news was broken to the public when Kennedy announced the naval deployment and readied the army. Meanwhile Castro mobilized his military forces.

October 23rd saw support for the deployment of the Navy on the Cuban coast from the OAS and diplomatic efforts from the UN. The situation got real intense on the 24th of October when the Soviet ships had reached the quarantine line in the Cuban waters. They were held back by direct orders from Moscow meanwhile defense options were being analyzed in Berlin. America realized that the situation was very dangerous because an invasion of Cuba could easily result in a launch of nuclear missiles on some American targets from Cuba. On October 25th all diplomatic efforts at the UN failed and the U.S military was set to DEFCON 2 all geared up for an attack.

The very next day the premier of Soviet Union sends a negotiation letter offering to remove the missiles from Cuba for the promise that America would not attack Cuba. On October 27th a U-2 plane is shot down in the Cuban airspace and another flies into Russia. The Soviet Premier issues another letter to the U.S asking them to remove their missiles from turkey in addition with the guarantee of not attacking Cuba. Meanwhile the soviets continue to test their missiles on Cuban grounds. It was Saturday the 27th of October when the world breathed a sigh of relief when Khrushchev announced that they would be dismantling the missiles from Cuba with just the promise from the U.S to not invade Cuba without insisting on the dismantling of U.S missiles from Turkey.