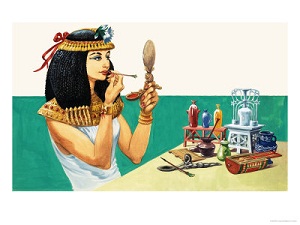 Want to learn more about ancient Egyptian cosmetics? Read on for a historical overview of the cosmetics used by men and women in ancient Egypt…

The use of cosmetics has been prevalent in Egypt since the earliest periods of the civilization. Archaeologists have been able to find evidence that suggests that the Egyptians have always been very concerned about their physical appearance which is reflected in their use of cosmetics.

For the Egyptians makeup and cosmetics went hand-in-hand. It is known that religion was a very important part of every individual’s life in Egypt. Religious practices required the people in general and the priests in particular to clean themselves by washing several times a day and then make them selves appear presentable before their gods as well as the people.

Amongst the cosmetics used by the ancient Egyptians was ground carob. This particular item acted like a deodorant for the Egyptian men and women. Since they were living in a hot climate they needed some way of repelling body odor and hence evolved the concept of rubbing the ground carob pellets in the skin. Alternatively they would place little pellets of porridge and incense at different places in the body especially where limbs met.

Archaeological evidences also suggest that the Egyptian women made use of cleansing creams. These were made using a mixture of oil and lime. The Egyptian medical manuscript known as “Papyri” also prescribes the use of the cleansing creams as body scrubs. One of the most popularly used body scrubs in ancient Egypt was the right natron. This was basically natron that is found in nature which had been painted red because of iron compounds present in the sand. This ancient Egyptian body scrub consisted of a special kind of wax, Cyperus grass, fresh moringa oil and gum of frankincense. These ingredients were finely grounded and then mixed with specially fermented juice extracted from plants.

The Egyptians even created special ointments that could be used to treat scars from Burns and injuries. Ointments such as Kohl and red ochre mixed with sycamore juice were extremely effective in making such scars less visible. An alternative cosmetic treatment was making use of a bandage along with honey and carob or frankincense along with honey.

The Egyptians were known to live by a healthy diet which ensured good dental health. However since the bread that they consumed had many sand particles it caused damage to their teeth. In order to ensure the health and hygiene of their teeth the Egyptians would make use of natural toothbrush popularly known as the miswak. A native tree of Egypt by the name of Salvadora perisica produced the ideal toothbrush along with toothpaste for the Egyptians. The Egyptians would also chew on herbs in order to improve their breath. In some cases they would even gargle with milk which would also help relieve bad breath.

The Egyptians also paid much attention to the way they would wear their hair. The wearing of wigs made out of human hair was common amongst the Egyptians especially on festive occasions. However Egyptian men and women would take good care of their hair using different products such as the hair setting lotion as well as hair dyes in order to maintain healthy and good looking hair.