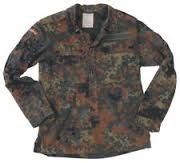 West German Flecktarn Army Field Jackets were worn by the German armed personnel as a camouflage uniform. Read our guide below for more facts and information…

“Flecktarn” comes from the German words “Fleck” and “Tarnung” that mean spot and camouflage respectively. The word came into use in 1976, during trials of German uniform. Although trial was carried out on various patterns, Flecktarn muster or the spot camouflage pattern was the main choice. It was ultimately approved for German Armed Forces in 1989. It is believed that Flecktarn camouflage was produced in collaboration with Texunion, a French company by Marquardt and Schultz. It is also known as “dot pattern”. This type of camouflage pattern has also been accepted by many other countries.

German Flecktarn has reddish-brown, medium olive green, dark olive and black spots on moss green background. The desert version, which was also known as Wustentarn, came in use in 1993 having meager reddish-brown and dark olive spots over yellow-tan. Some are of the opinion that this pattern could have been induced by “pea pattern”, but there is no concrete evidence to confirm this.

This Flecktarn, a field jacket, was used in Germany. It is made of poly cotton material like any other parkas and trousers. This overall is ideally suited to wear webbing and load bearing equipment on top. It has single piece layer on thermal mid layers. Since it does not have flaps and loops which cannot be secured, it is suited as a jump suit.

Features of the overalls

The main features of the tanker overalls are:

These overalls are baggier around waist and hips to make longer sittings comfortable. The sizes are calculated in inches based on height and chest. In standard German measurement the waist is about 10 cm smaller than chest. However, factory specification measurements cannot be guaranteed.

The distribution of color in standard version and desert version are as under: