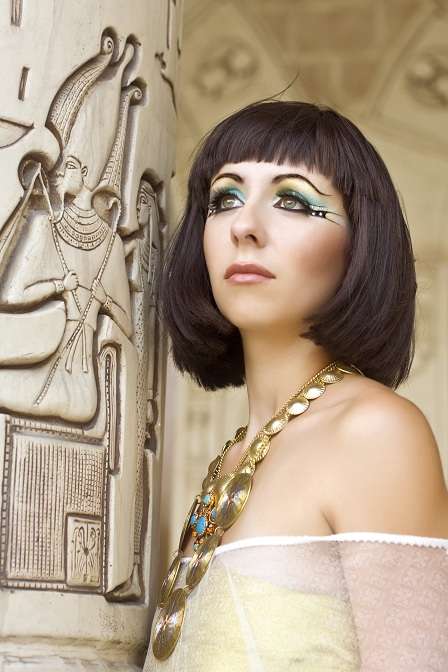 Want to learn more about Egyptian eye makeup? Read on for a historical overview of the concept of applying eye makeup amongst the ancient Egyptians…

Ancient Egyptian paintings and portraits clearly display that the Egyptians were fond of eye makeup. Upon observation you will be able to find that the eyes have always been outlined and beautifully ornamented using various cosmetics and makeup techniques. Eye makeup was an important part of dressing up for daily activities for both men and women in ancient Egyptian culture.

The Egyptians had a holistic approach when it comes to eye makeup. On the one hand it was really decorative and exquisitely ornate and on the other hand it was considered to have medicinal benefits along with which it was associated with spiritual and magical practices of the ancient Egyptians. Ancient Egyptian eye makeup was of two basic types. The first of these was known as Udju. This was derived from a green ore of copper known as malachite. Mount Sinai was rich with reserves of this particular ore and hence was the place where the Egyptians obtained the raw material for creating Udju eye makeup. The site of Mount Sinai was considered sacred for the Egyptians and they assigned it to the goddess of beauty known as Hathor.

The other kind of eye makeup produced by the Egyptians was derived from a dark gray ore obtained from lead. It was known as Mesdemet and could be derived from both antimony sulfide and lead sulfide. The area of Aswan was particularly rich in deposits of galena and so was the Red Sea coast. A number of Asiatic nomads also presented the Egyptians with this unique form of eye makeup.

The entire process of making use of the different kinds of makeup was quite extensive especially when compared to the ready-made products that are available today. The process would begin by grounding the cosmetic materials into powder form and then depending upon the mixture the type of powder being utilized had to be mixed together with another substance. The most commonly used material with which these raw materials would be mixed with was animal fat. This helped the powder to adhere to the eyes.

But naturally the Egyptians had their own set of eye makeup equipment that consisted of grinders, palettes and applicators. Archaeologists have been able to find such equipment amongst the earliest burials sites from the pre-dynastic era. Eye makeup was something that was practiced by people of all status and was considered to be an essential part of everyday life.