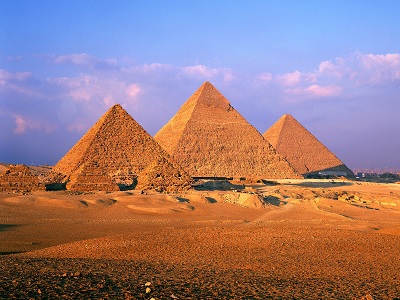 Want to learn more about ancient Egyptian landmarks? Read on for facts and info about the most important landmarks from the country of Egypt…

As the land that houses one of the Seven Wonders of the World Egypt is one of the most historically significant countries on the face of the planet. This ancient country has a number of very important landmarks which have become an identity forming symbol for the nation over the years.

Some of the most popular and important Egyptian Landmarks are as follows:

Egyptian Pyramids are counted amongst the wonders of the world. The last standing specimens from these wonders are situated at Giza in Cairo. There are three humongous pyramid structures at this site that were built more than four thousand years ago. Named as Khufu, Khafre and Menkaure it is believed that the pyramids were built during the reign of Pharaoh Necropolis.

The Valley of the Kings

This is another popular Egyptian landmark situated in the city of Luxor. To its claim to fame is the fact that this valley is actually the burial site for many ancient rulers of the country of Egypt. Another interesting fact about the valley is the fact that it is believed to house the cursed tomb of an Egyptian pharaoh which lends a mysterious air to this important landmark.

Also situated in the region of Luxor, The Luxor Temple is another important landmark. It is located on the eastern banks of the River Nile and was considered to be the center where many diverse and elaborate ancient Egyptian rituals used to take place. The temple actually went under ground as it got covered by river silt but it has been unearthed by archeologists following which it has become an important identity forming symbol for Egypt.

The Sphinx is perhaps the most distinctive and popular landmark of Egypt. Situated in Cairo this unique structure is considered as being one of the oldest standing structures of Egypt. The Sphinx was actually a mythological creature which has been meticulously crafted out of huge blocks of limestone. The larger than life structure has the face of a human being upon a body of a loin.

This site is dated further back than four thousand years. It was an important religious site for the ancient Egyptians and is truly impressive in terms of its architecture. The temple was considered to be the center of the city of gods and priests that were also considered to be god-like in ancient Egypt.

Although this particular site does not date as far back as the pyramids it is also an important landmark of the country. This unique structure was built using a combination of wood and mud-brick. It is believed that the foundations of this mosque were laid down by Shaia Ibn Tulun back in 879 AD. The structure is characterized by its pointed arch, inner arcades and decorative interiors.

The above mentioned are just some of the fine examples that make up the most important landmarks scattered across the country of Egypt.