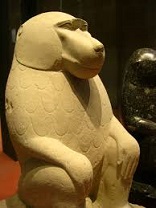 Want to learn more about Egyptian Baboons? Read on for facts and info to discover the history that surrounds the Egyptian baboon…

Baboons were considered to be very important figures in ancient Egyptian mythology and religion. This was a very interesting development in Egyptian mythology as scientists or archeologists have not been able to find a single species of baboon or any other monkey for that matter that is native to the land of Egypt.

Archeological findings dating back to the fourth millennium BC clearly go to show that the Egyptians were in fact quite familiar with baboons. The paintings, carvings, statues and hieroglyphs from that era depict the dangerous and imposing baboon as well as the long-tailed monkey from Africa. It is quite likely that the Egyptians believed that one of the gods actually transformed into the form of a baboon which is why it was held in high reverence. In fact historical records indicate that the species known today as the baboon actually derives its name from an ancient Egyptian linguistic root. The linguistic root actually attracts attention of the observer to the sexual behavior of the animal.

Baboons were not the only species inhabiting the country of Egypt. Rather Egypt used to be a much greener place in ancient times which provided an ideal habitat for a wide variety of monkeys. It took a considerable amount of time for the lands of Egypt to lose its greenery and become restricted to having only one fertile belt across the River Nile.

Historians suggest that during the Old Kingdom baboons and various other species of monkeys were dwelling in the southern regions of Upper Egypt. However baboons cannot be found in Egypt today. Rather the vast majority of the baboon population is restricted to the landscape of Sudan.

Historians are also sure of the fact that the Egyptians started importing baboons into their territory by the New Kingdom. The land of Punt and Nubia were the two locations from where the monkeys would be imported. Upon arrival they would be kept in specially created capacities and some would even consider keeping baboons as pets. The most notable use of baboons was however in the temples along with the other selection of so-called divine animals.

The baboons would breed within these various capacities and the Egyptians faced a considerable amount of difficulty in successfully increasing the population of local monkeys. Archeologists have been able to find mass graves of the sacred baboon known as the hamadryas from the Late Period. Other monkeys found along with the above mentioned species include the papio cynocephalus anibis, green monkeys, barbary ape and red monkeys.

Since the Egyptian baboon became associated with religion the Egyptians had to take great care of the entire population. However their life expectancy was fairly limited in Egypt. The bulk of the population could not survive more than six or at the maximum ten years. This was largely due to prolonged confinement, lack of nutrition, lack of sunlight and various forms of degenerative bone diseases.