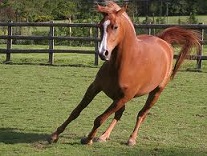 The legendary Chestnut Egyptian Arabian horse has been part of ancient history in Egypt and Arabia. It is the iconic horse that is known to pull the chariots of the warring armies. It has been instrumental in the conquest of different countries which were at war with Egypt and Arabia.

The Chestnut Egyptian Arabian horse is considered a noble and pure animal which has served both the humble and the Kings in past centuries. There are many Egyptian Hieroglyphics which pay tribute to the swift and strong horse and its invaluable contribution to the Egyptian people.

The purity of the chestnut Egyptian Arabian horses’ bloodlines is considered legendary because it is a blend of the straight Egyptian with the original Arab horses. This horse still has a special place and reputation in the pedigree of horses because its bloodline has been preserved very carefully and has been verified time and again.
This fascinating horse is considered to be one of the few purebred horse bloodlines. Their history denotes that this amazing creature has been of great value since it was utilized in both war times and peaceful eras of Egyptian history.

Both the powerful royalty and noblemen along with the humble working people benefited from the endurance of this magnificent animal. Warriors are known to commemorate its contribution in the many conquests due to its strength, speed and agility on the battlefield.

These horses were honored by creating beautifully equipped stables as well as individual palaces for the thoroughbred horse. The first and oldest documentation of the chestnut Egyptian Arabian horse bloodlines started in Egypt by the Turk Mohamed Ali. He had received as a bounty from a peace treaty with Arabs, a total number of 1,100 Arabian horses which were part of the settlement with Arabs.

Detailed records of the horses along with their pedigrees were maintained by Abbas Pasha who was his grandson. As the empire faced a decline in its power and glory, the herd of chestnut Egyptian Arabian horses was sold and some of them were actually purchased by Lady Anne Blunt. She kept a few in Egypt and shipped the rest to Crabbet Stud farm in Britain. The remaining horses were locally purchased and protected by Egyptian royalty.

In the year 1908 an official government department was established by the Egyptians to repurchase and record all the horses which were descendents of the original 1100 horses.

The bloodlines were preserved even though the horses were spread far and wide across the world. Those devoted to preserving the bloodline and the qualities and beauty of the horse did not tolerate crossbreeding of this course.

This is the reason why the straight Egyptian is still known as a pure bloodline of horses even though there are horse farms that breed these horses in Europe and America. The desert strains can be traced back to the Bedouin horses allowing them to authenticate the breed.