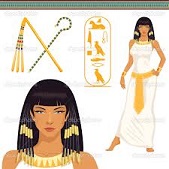 Cleopatra was by far the most prolific pharaoh of the Hellenistic regime and also the last. She was the only one in her line to have imbibed and accepted Egyptian beliefs and the symbols that were an integral part of the religion. Her patron goddess was Isis and she has often been depicted as the queen and incarnation of Goddess Isis. Particularly significant is the depiction of Cleopatra and her son Caesarian as Isis and Horus in the temple of Dandera. Cleopatra equated herself with Isis the cow eared goddess of motherhood, fertility and magic. She is often seen with the crown of Isis.

The depiction makes every attempt to display the similarities between Cleopatra and Isis. Cleoptra is shown wearing a crown made of falcon-tail feathers which were sacred to Horus and Isis. It also has elements such as the sun disc and cow horns which were not only sacred to Hathor and Isis but also worn by them. Cleopatra’s mark as the queen is shown by the diadem with Uraeus and the cobra Modius.

The mother son duo of Cleopatra and Caesarian are shown standing in front of the divine mother son duo of Isis and Horus, thus inviting comparison and aligning herself with the goddess. The diminished role of the husband Osiris further adds to the implication of equating Cleopatra with Isis. Cleopatra was known to have frequently dressed as Isis, all in the attempt to bring forth a strong parallel between the goddess and the queen.

Another symbol which is commonly associated with Cleopatra in movie and theatrical depiction is that of the triple Uraeus. It was adopted by her as her personal insignia which speaks volumes about the importance of this symbol. Scholars and Egyptologists have varied versions of the meaning of this particular symbol. While many believe that the three cobras stood for three Kings: Caesar, Mark Antony, and Auletes . Others believe that they may also refer to the three kings in Cleopatra’s title as the Queen of Kings. Another theory states that the insignia may have had geographical connotations with the three cobras representing upper and lower Egypt and Rome. Thus being a symbolic representation of Cleopatra’s dream of a joint Egyptian Roman empire with her at the helms.

Another Egyptian Symbols often seen is the ankh which was supposed to symbolize eternal life and was seen in the hands of most Egyptian pagan deities. Most Historians agree that it would be difficult to get the exact likeness of Cleopatra even after analyzing the various busts and paintings of the monarch. Since the facial features vary widely in every piece, they stand more for their symbolic depiction of the queen in her various roles as the woman, goddess, mother and queen