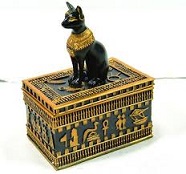 Want to learn more about the Egyptian Bastet? Read on for facts and info about this fierce lioness goddess of Lower Egypt according to ancient Egyptian mythology…

Bastet was the name of a female deity from ancient Egyptian mythology. She was considered to be the goddess of solar energy and war. Historical records indicate that the Egyptians have worshiped Bastet since the second Dynasty.

The earlier generations amongst the Egyptians would refer to this goddess as Bast. It was later that the priests of Amun gave her the title of Bastet. This was a diminutive form of her previous title because she had been stripped of her dominance in the pantheon with the rise of another female goddess by the name of Sekhmet, the fierce lioness warrior deity.

Bastet was originally considered to be the goddess of Lower Egypt. However as Upper Egypt conquered the lower Delta region Sekhmet, the goddess of Upper Egypt took over her domain. Sekhmet was not able to remove Bast from the pantheon but her significance and status declined following which she assumed the title of Bastet.

Depictions of Bastet in the middle Kingdom show her along with a cat which is considered to be a sacred animal. With the passage of time Bastet herself adopted the form of a cat headed woman. She was depicted carrying a box along with a sacred rattle during the new Kingdom.

Originally known as Bast, this cat goddess was the official deity for the people of the town of Bubastis. This was the center of her cult and the Bubastis people actually assumed their name reverence of the local deity. During the second Dynasty Bast was considered to be the protector of Lower Egypt. Hieroglyphics from this era show her as a fierce lioness and she was popularly known as the female devourer and the defender of the pharaoh. She was also associated with the highly revered Sun God of ancient Egypt, Ra because both of them were solar deities. This association enabled her to acquire the title of “Lady of Flame” as well as the “Eye of Ra”.

Some hieroglyphics show the goddess of Lower Egypt holding up a ceremonial sistrum in one of her hands with the other one holding an aegis. The aegis was drawn in the form of a collar that had a lioness’s head painted upon it. Throughout much of Egyptian history Bastet has remained as a solar deity. However with the advent of the Greeks into the Egyptian lands her association with Sun was changed to that of the moon.

Archaeologists were able to find about 300,000 mummified cats in the temple of Bastet. According to ancient Egyptian tradition when a cat passed away at the owner’s house the family members would actually shave their eyebrows and then proceed with the body to the center of Bastet’s cult, the town of Bubastis. Bastet is also associated with another fierce lion god by the name of Maahes of Nubia. This was a new addition to Egyptian mythology and by the new Kingdom Maahes was being regarded as Bastet’s mother.