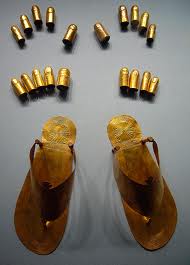 The exact location of Egypt on the surface of the globe makes it an incredibly hot country. This is why people in ancient Egypt were not very fond of wearing them and would be quite comfortable going around barefoot all their lives. The only kind of footwear they did have were sandals, and children were never made to wear shoes or any other kind of footwear.

Anyone who wanted to acquire a pair of sandals would make them himself. The most commonly used materials for making sandals in Egypt was straw and reeds. These materials would be used to weave flip-flop like styles that are commonly available in the shoe market today. The wealthier people made use of different materials such as leather. Egyptian leather sandals tended to be a lot stronger and hence could last for long. The Egyptians had their own version of the story of Cinderella within which Cinderella was a slave girl who actually loses her pair of straw slippers.

Archaeologists have been able to identify one of the oldest known hieroglyphs from Egypt displaying stories of a sandal maker. These images were preserved in a number of different tombs and narrated that the ruling Pharaoh of Upper and Lower Egypt in 3100 BC, King Menes always used to have a sandal maker that accompanied him wherever he went.

The irony is that the majority of hieroglyphs from the old Egyptian kingdom as well as the middle Kingdom show all Egyptians going around barefoot. It was during the start of the new kingdom that sandals actually came into use. The Egyptians started favoring sandals as they helped them to travel over hot desert sands. The sandals were deliberately given open tops which helped to keep the feet cool during the hot summer season which lasted almost throughout the year.

The use of sandals was first initiated amongst the nobles, officials, pharaohs, and kings and queens. During this period of time the common man would seldom be seen wearing a pair of sandals.

The sandals that were worn in Egypt had a very simple construction. The base of these sandals was primarily made out of wood or goatskin. They would sometimes extract the fibers from the papyrus plant or palm trees and use it for constructing the base of the sandals.

The sandals would be held around the foot using a pair of simple straps. The straps would be attached in a cross and would easily arch over the foot so as to take its shape on comfortably. The big toe and the one next to it had a strap in between it just like modern day flip flops.

Most of Egyptian sandals that have been unearthed by archeologists are made according to the same style although at times the materials would vary. The sandals were also deliberately given a pointed edge front and some pharaohs would have elaborately designed and adorned sandals especially made for them selves.