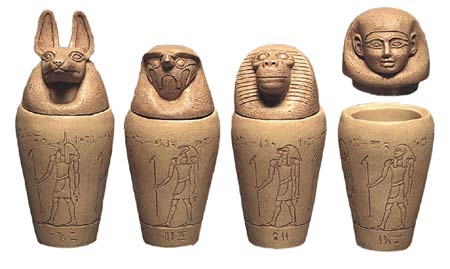 If you’re interested in the process of mummification in ancient history then you should know that Egyptian Canopic jars are a vital part of the ritual of mummifying the dead. The process is actually incomplete if you don’t have these canopic jars which will hold the organs and preserve them for the journey into the afterlife.

In ancient Egypt the main organs which located in the torso of the human cadaver were removed from the body of the dead. These were carefully transferred and placed in Canopic jars which are actually decorated cylindrical urns which had wide necks to allow the easy transfer of the organs inside them.

The heart was not removed but in fact it was protected with different symbols because it was known to contain the essence and spirit of the deceased person. This meant that the person would be able to face his trials in the underworld during the Day of Judgment with the power of his or her heart.

Each of the organs was stored in individual urns. These jars were decorated with different materials and the ornamentation depended on the status and wealth of the person whose organs it had. The material utilized for creation of the jars was precious metals like gold and silver for the wealthy and basic materials like stone, wood and even pottery for the more humble deceased person.

Importance of the Canopic Jars

The main identifying feature of the Egyptian Canopic jar is its cover which has the different heads of either man or animal. This basically means that you do not need to open the jar to identify which organ was placed inside. Each organ was protected by a certain god according to the ancient Egyptian religious beliefs and mythology. For example the jar which was housing the liver had a man’s head on the stopper of the lid. This basically was a representation of the god Imsety who was said to protect the liver. Another jar which would house the stomach would be decorated with the jackal who was an incarnation of Duamutef.

The head of a falcon which represented the god Qebehseneuf was used to decorate the jar which contained the intestines. The protector of the lungs was represented with the head of a baboon who was an incarnation of the god Hapi known to protect the human lungs.

As mentioned earlier the heart was left inside the human body and in the underworld the God of the dead who was considered to be Osiris would be judging the people who had died and most through the underworld before being  reincarnated.