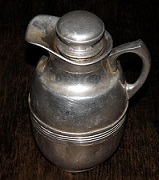 The original German Army thermos, which was used by the German Army during WW I and WW II, is a wonderful collector’s item. Read our guide below for more facts and information…

The inner glass portion of this thermos is attached to the top with the help of a spring. On twisting the top it comes out of the central thermos body. It was used to carry hot coffee, tea and soup.

This thermos has an insulated body with a cup. The plastic body of the thermos is molded with green colored foam that is semi-hard. The canteen can hold around 1qt of fluid. The thermos has an aluminum cup that is attached to the bottles with collapsible handles. The canteen also has a strapping material made of synthetic fibers and has a metal roller buckle in front.

This is an East German thermos that comes with a screw aluminum cup that is attached to the main body with collapsible handles. Its main distinction is the ‘rain pattern’ on the body of the canteen. The body is made of plastic and can hold around 1 qt of fluids.

This was used by the German Air Force during WW II to carry tea, soup and coffee in the flight. It comes with a stopper, removable cup, a handle and a mercury glass insert (copper in color). The height of the thermos is around 11” and the width is around 5”.