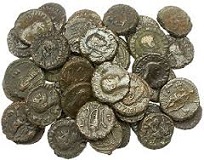 If you follow the timeline to see different popular Egyptian collector coins then you should start with the ones dated from the 276 A.D. till September of 282 A.D. which are titled Probus. These belong to the Roman provincial Egypt. All these coins have been minted in Alexandria and have eagle prints on the reverse side. If a coin collector orders multiple coins then you can actually have different dates of this era. These coins are currently not being traded in the market and are generally priced at $33 a piece.

The second era of the Egyptian collector coins is circa 275 to 310 A.D. These coins are also part of the Roman provincial Egypt and include many scarce varieties. The basic kinds of Egyptian coins have the classifications based on emperors who commissioned them and were minted in Alexandria, Egypt or in Tyre and Athens in Greece.

Different coins were minted and named after the Roman emperors as and when they were in rule starting with Probus, followed by Emperor Carinus and Diocletian. These coins were then minted under the names of emperors Maximian and Constantius I.

There is the possibility that they were more coins minted under the names of different emperors later on however these are extremely rare to find on the open market for collectors. Most of the coins are in fine quality as they were quite a bit of them in circulation and they have been well preserved.

Coins Ranging From The Ptolemaic Kingdom

Egyptian collector coins pertaining to the Ptolemaic Kingdom in Egypt depict the image of Berenike II who was the spouse of Ptolemy III and these are dated from circa 246 till 221 B.C. Another coin is the 2 1/2  drachm coin which is titled the gold attic.

When compared in weight to the Ptolemaic drachms, then one of the attic gold coin was equivalent to three Ptolemaic drachms! This was established because of the standards institutionalized in 265 BC when the last pentadrachms were minted. It is thought that the gold for these coins was the bounty which was in the custody of Ptolemy III which was the war spoils of the third Syrian War. It is reputed to be approximately equal to 40,000 gold talents.

These gold attic coins weigh approximately 10.551 g with a diameter of 21.7 mm and were minted in Alexandria. While the front has an image of Berenike II wearing a veil, the reverse simply has an individual cornucopia which is tied with a fillet and has stars on the sides. These gold coins retailed from $11,950 onwards.

Some of the rare coins are thought to have been minted in Athens or Thera and this makes them even more intriguing. Some unique errors appear in the coins which were originated from Sidon and Tyre.

These include the Ptolemy II Philadelphos coin, which appeared circa 285 to 246 B.C. The error which appears in this coin is basically the appearance of the letter ‘K’ which seems to crop up in some rare coins behind the ear of the King. This error has made it a highly important Egyptian collector coin and it is perhaps one of the finest coins in the rare category which was minted for the ancient Egyptian coinage.