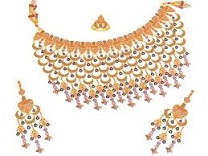 Want to buy Egyptian costume jewelry? Read on to explore the kind of variety that you will be able to find the market…

Some fine examples of Egyptian costume jewelry are as follows:

This particular piece of Egyptian jewelry is part of the Cleopatra costume jewelry collection. It is an adjustable bracelet that replicates the styles conventionally sported by belly dancers in Egypt. It can also be worn with a Cleopatra costume. The bracelet rolls around like a snake’s body and has a cobra head at the top.

This is yet another classic piece of Egyptian costume jewelry. It features a three dimensional profile of the pharaoh in the form of a pendant. The necklace has been created according to the Egyptian revival style of decoration. It is worn around the neck with a brass octagonal cable link which measures a total of 36 inches in length. The beautiful pendant has been finished off with a pink rhinestone accent and measures 5 inches in length.

Egyptian Eye of Horus Udjat Ring
This piece features one of the most important ancient Egyptian mythological symbol which is the Eye of Horus. This symbol was assigned to one of the most powerful deities for the Egyptians, namely the Sky God Horus. It features a number of other symbols along with the eye of Horus such as the Udjat which have been meticulously crafted into the surface of the ring.

This is a rather unique piece of ancient Egyptian jewelry that showcases the Roman influences as well. It features the profile of an Egyptian pharaoh wearing an elaborately decorated head dress. It comes along with a 26 inch long chain and the pendant can be resized by a clasp closure. This particular jewelry article is unisex and can be worn by both male and female.

Above mentioned are just some fine examples giving you an idea of the kind of Egyptian style costume jewelry that you will be able to find in the market. This kind of jewelry is not usually worn for adornment purposes rather it comes into use for theatrical performances and events such as Halloween and costume parties.