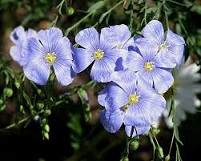 In ancient Egypt, the River Nile was considered a life-giving source. This was mainly because it provided water for unique and interesting crops to flourish on its banks and inland. One of the most interesting plants and functional crops was the flax plant or the Egyptian linen plant.

Description of the Egyptian Linen Plant

The flax plant consists of fine and long stems with long leaves which are green in color. It consists of a round fruit which has tiny and glossy seeds inside it. The fiber for creating linen is removed from the base of the stems of this plant. It is quite lustrous and slightly flexible but very strong as compared to cotton. For this reason it makes it more durable and the fiber is utilized to spin bed sheets, ropes, twine as well as fabrics.

The fibers of this plant are grayish or yellow in color and when flattened out they turn out to be from 60 to 80 cm long and each of these strands consists from 20 to 40 individual fibers. The strips of the Egyptian linen plant fiber are divided into different strands of the desired thickness. These were often spliced together from one into the other and twisted to create a ‘rove’ which was later on spun into thread.

The Egyptian linen plant has been cultivated in the fertile Nile Delta for over 5000 years. One of the oldest looms used for spinning was found from the fifth millennium BCE whereas weavers were depicted in frescoes during the Middle Kingdom of Egyptian history.

Use of the Egyptian Linen Plant in Ancient Times

Clothing was an item utilized to separate the elite from the poor in ancient Egypt. The finest linen was utilized by the elite and powerful people. This fabric was considered the garment which covered the body of the Egyptian gods and goddesses. However, the idea was to have beautiful linen on the outside and a good soul on the inside.

It would be considered a grave sin to cheat the gods and be disrespectful while wearing their outer garments. The linen fiber was woven to create different types of fabric like lace and bed sheets. It was often bleached and then colored with natural dyes. This was an important trading material and hence the importance of the Egyptian linen plant to the locals.

The fabric squares were stitched into kalasiris which are described as sack like shirts tied around the waist like a kilt. Unfortunately the living were not the only ones who were clothed in linen. In fact when the dead were prepared for the afterlife, the mummies were wrapped in linen after being anointed with oil.

Each of the body parts including the fingers were wrapped separately in small pieces of linen to protect the cadaver from the goddess Tait during their journey to the other world. During funerals the linen fabric was offered as a symbol to the dead.