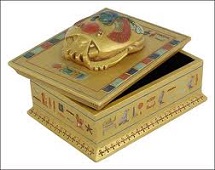 Egyptian marble boxes are extremely ornate boxes that are used as decoration items by home owners. The majority of these boxes are made using bonded marble where as hydrostone, which is a compound of gypsum may also be used. This medium allows users to place the marble boxes indoors as well as outdoors.

This Egyptian marble box features a carved statuette of the ancient Egyptian deity known as Anubis. Anubis was the jackal headed deity associated with the underworld. The three dimensional statue of Anubis is made to sit on the lid on this marble box which measures six and a half inches by five and a half inches. This particular box has been made using bonded marble and has been given a gold finish with intricate carvings and color detail on the sides of the box. You can get your hands on this Egyptian marble box for about 36 dollars.

The Ankh symbol is perhaps one of the most popular and well known symbols from ancient Egypt culture. This is a highly ornate box made using bonded marble. It features the symbol of the ankh in relief sculpture covering the surface of the lid. The borders of the lid have beautiful color decorations and intricate detailing adorns the symbol of the ankh as well. Two parallel lines are going across the sides of the box and have ancient Egyptian hieroglyphs painted inside them. This Egyptian marble box is available for forty two dollars in the market.

This is a very colorful version of the Egyptian marble box that has been made using bonded marble. It features the prominent symbol of the “All Seeing Eye” which belongs to one of the most important ancient Egyptian deities known as Horus. The symbol has been carved in relief and has traditional blue outlines. It has a complimenting border that goes all along the lid decorated with a pattern of dark blue, light blue and orange squares. Various other hieroglyph designs can be seen on the sides of the box. It has a height of about 2.75 inches and measures about 7 inches long and is being sold in the market for about $42.

This particular variety is truly a work of art. It features a three dimensional structure of a beautifully adorned scarab in gold finish. The realistic looking scarab is adorned with a pattern on its back in the classic Egyptian combination of dark blue, light blue and orange. A border in a similar color scheme goes around the surface of the lid. The sides of the box feature different hieroglyphs and the symbol of the ankh can be found running around the bottom. This particular box is available for round about the forty dollar mark.

Above mentioned are just some of the fine examples of the variety that you will be able to find in Egyptian Marble boxes in the market.