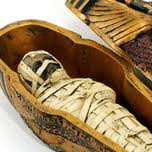 Want to learn more about Egyptian mummification? Read on for facts and info on the ancient practice of mummification that was conducted upon the dead…

The mummification process went through a series of modifications over time. In the pre-dynastic era for example no artificial means were employed to mummify a body. Rather the dead body would be wrapped in goat hide following which it would be buried in an oval shaped shallow pit in the desert sand. Eventually the body would be thoroughly dried up due to the heat of the sand which eliminated all fungi and bacteria from the body which made the dead body immune from decaying.

Since the desert sands would naturally shift marking graves was almost impossible. As a consequence the Egyptians would often stumble upon old graves when trying to bury new bodies. This led them to discover how the natural mummification process was working. Secondly grave robbery has been a very popular act in ancient Egypt because the dead would be buried along with many valuable items which would make it the ultimate treasure chest for the opportunity seeking individual. This was another way in which the Egyptians discovered the effectiveness of their old school mummification process.

Development in the Mummification Process

Over time the Egyptians started creating tombs over for the dead. This meant that the body would no longer be in direct contact with the sand. At this point they would use a mat made out of twigs upon which they would keep the body and then cover it with a twig box. Soon enough wooden coffins came into use. However this new trend necessitated that the process of mummification be revolutionized so as to ensure the preservation of the body in these new conditions.

According to ancient Egyptian beliefs having a well preserved dead body was very important in order to ensure a blissful afterlife. Ancient authors such as Diodorus, Herodotus and Pliny have clearly listed out the materials that were used during the Egyptian mummification process as we know of it today.

Amongst the items used was Alum, although many modern scientists debate whether the use of Alum was deliberate or a coincidence. Beeswax was one of the most important materials. It was used to cover the nose, eyes, ears as well as all other embalming incisions during the mummification process. They would even create statues of the four sons of Horus using beeswax and would place them along with Canopic jars.

The mummies from the Greco-Roman period were coated with bitumen. However the scarcity of this material greatly limited its use. Cassia and cinnamon were also used in the mummification process along with cedar oil, henna, honey, juniper berries, lichen, natron and special home made ointments. The use of materials also varied over time but in general the above mentioned items were essential to conduct the Egyptian mummification process.