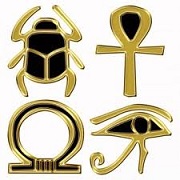 Want to learn more about the Egyptian symbol of protection? Read on for info on the Eye of Horus, which was considered to be the protection symbol by the ancient Egyptians…

This symbol of protection first appeared alongside the images of Horus’s mother known as Isis. A number of other deities that were associated with Isis also had this symbol displayed alongside them. In the native language the symbol of protection was known as the “Wadjet”. It appeared to be in the form of an eye which is believed to belong to one of the oldest Egyptian deities that carry the same name.

With the evolution of Egyptian mythology Wadjet later on became associated with another deity known as Bast as well as two others whose names were Hathor and Mut. Wadjat, a female deity, was considered to be a solar deity. The Egyptian symbol for protection was initially used for depicting Wadjat’s eye. This symbol represented the all Seeing Eye. Some early examples also depict the deity Hathor with the eye. Archaeologists have also been able to find a large number of funerary amulets that bore the symbol of the eye of Horus and were often made in the shape of the symbol.

The use of the Wadjat as a protection symbol first started with the king. It was believed that the symbol of Wadjat would act as a protective symbol for the King in this world as well as in the afterlife. The basic belief attached with the symbol was that it would ward off evil. This is why the symbol can also be seen painted on ships and boats so as to ensure safe travel on the waterways.

The Egyptian symbol for protection had specific meanings. The eye of Horus, which was the protection symbol was made up of different parts that were considered to be corresponding to the 6 senses. The Egyptian counted thought, sight, hearing, taste, touch and smell as the six vital senses of the human being. The eye was considered to be the receptor of sensory perception.

The protection symbol was constructed in a very specific way and had its own laws that were to be followed. The senses would be displayed in accordance of their significance and the amount of energy that the receptor i.e. the eye needed to fuel the particular sense.

This ancient symbol will also considered to have a mathematical value in the ancient Egyptian system of measurement. The Eye of Horus was quantified as the fraction that could be used to measure parts. According to the traditional system the symbol for protection measured one heqat with every part measuring factions of the whole.

The Egyptian symbol of protection has also been featured in much artwork in the following generations and there are a number of conspiracy theories surrounding the Eye of Horus as well.