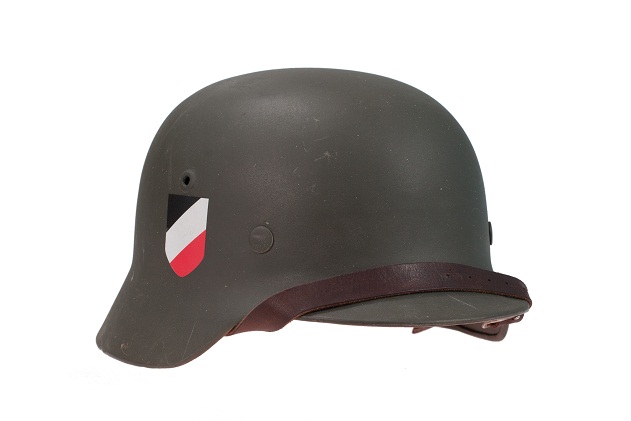 There are many reproduction decals for German helmets that have been manufactured since the 1950s. They were utilized initially on the play helmets that were stored in toy stores in this decade. Interestingly enough, the first designs of the decals that were found in the market were made in Japan. Developed like plastic model kits, they had peel and stick on transfers which were very easy to use. With time the techniques improved and better technology provided long-lasting results where the sticker would remain for a long time.

Use of Decals on Real Helmets

In order to repair many worn-out helmets people would purchase these decals for approximately $.50 and cover up the problem area on the helmet. As demand for the decals increased, manufactures focused more on fantasy decals and authentic decals that resembled the ones utilized during World War II.

Some of the fancy decals were never even used in Nazi Germany, but have been appropriated to the Third Reich by imaginative manufacturers. Also after the 1960s you could buy the German World War II helmet for less than $50. However, with the increase in demand for war memorabilia and artifacts, the prices have shot up considerably. When the decals became historically accurate the quality also improved. Due to the use of lacquer on top they became more durable and long-lasting.

By the 1980s it was evident to most collectors that there were not many original helmets from the World War II era in the market. There was a massive gap in the demand and supply that could not be bridged with the military surplus and original helmets. Tthe ones that were available in the military surplus stores were pasted with new decals and sold as reproductions or original helmets. Some decals are so amazingly made that they are good forgeries of the originals. People try and sell these counterfeit helmets as originals.

By the 1990s very good quality decals were available in the market and a discerning collector would be the only person to notice the difference between authentic and replacement designs. The postwar helmet trend continues today. You can see near perfect reproduction decals frequently. It is fine if a person purchases them knowing that they are good replica. However, if a person tries to profit from marketing them as authentic German World War II era helmets they are committing fraud.

Not only are the decals very high quality, but they look amazing on original helmets. This has led to an underground market for the alteration and manufacturing of helmets that can fetch anywhere between $1500 to $4000 after being forged. Even though it seems that the future of German helmets as is short lived, it is good to know that the massive amount of replication and reproduction still fall short of the original quality of the product, so not many will be defrauded.