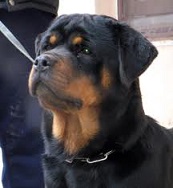 The German Rottweiler dog is gifted with a massive and powerful body that is actually very muscular. It has a broad head and rounded forehead with well-developed muscles. The teeth have a scissors bite, while the nose and lips are black in color. The almond shaped eyes of the German Rottweiler are medium sized and dark-colored. Its triangular ears standing erect on its head and give it a very alert look. While the tail is customarily docked it is illegal in most parts of Europe to indulge in docking tails. The rear dew claws are generally removed.

Generally there is a deficiency in the color gene that makes the coat a very light red. Ggenerally the difference between the German and American Rottweiler is dictated by the standard organizations in each country. At a glance the German Rottweiler is considered to be shorter and stockier than the American dogs along with having a block size bighead. You will find different breeders who breed for the German characteristics and American characteristics specifically.

Temperament of the German Rottweiler

The German Rottweiler, or Rottie as it is called by its fans, is a very calm and trainable dog. It is exceptionally courageous and devoted to the family and is considered a very powerful animal.

Since it is very protective and loyal it can defend the family as required and take high degrees of pain. The temperament is very balanced and it has a serious mannerism. The breed prefers an owner who is calm, strong willed and firm enough to handle the massive size of this dog. The dog is exceptionally intelligent and has been utilized over many decades in police and military work, along with being trained for tracking the smuggling of illicit items in the customs division.

Training of the German Rottweiler

The German Rottweiler requires a lot of exercise and nothing is ever enough for them. You can take them out on a daily walk or jog in the park or the woods and they will love interacting with nature. The breed requires extensive training as a puppy because it is a massive size dog. The main skills it requires are socialization and obedience skills. They are very prone to maintaining order in their pack and like to be the pack leader so it’s not a dog that you can confine to a small cage in the backyard. In order for the Rottweiler to function properly in the home you must be firm and become the leader of its pack. It considers the family its entire pack. It is not very friendly to outsiders who may include extended friends and family of the owners.

The male dog generally ranges between 61 to 69 cm in height, while the female falls in the height range of 56 to 63 cm. The weight of the male dog can range anywhere between 43 to 59 KG, while the bitches range between 28 to 52 kg. The basic health problem suffered by the breed is ACL damage along with a strong leaning towards hip dysplasia. Sometimes they can get entropion, which makes the slits between the eyelids very narrow. The dog is a snorer and easily overeats.