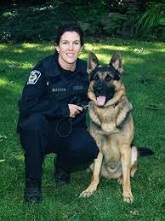 The German Shepherd cop dog is very valuable in terms of its basic characteristics, which are intelligence and physical strength. These dogs make noteworthy companions and are very loyal and protective towards their owners. As far back in the 19th century the Berlin police force has used German shepherds as cop dogs to protect the law-enforcement personnel who patrolled the dark alleys and dimly lit street ways. They offered a lot of protection and were exceptionally courageous in defending the police against attackers.

This breed is very new and young because the first breeding club for German shepherds was established in 1899. It was initially developed as a working dog to herd cattle. Soon the characteristic traits of courage and protectiveness were recognized and they were utilized as guard dogs and police dogs by the breeding club known as the VS.

The dog was bred very carefully to promote its utility and intelligence. Furthermore, the training practices focused on the skills of protectiveness, tracking and obedience. A lot of time and money was spent on developing this dog and training it.

Initially the Europeans thought that it was too expensive and they were seen as protective dogs only. However, following World War I, the track record of the German Shepherd resulted in a change in perception. Today the German Shepherd cop dog is essential in every reputed law-enforcement agency. They have proven to be indispensable as companions as well as trackers. Some dogs have a very keen sense of smell and this has been developed further to allow them to track explosive devices and illegal drugs without raising any attention.

The dog is exceptionally alert and has also been trained for tracking down decomposing bodies because it can locate them through its keen sense of smell. After serving intensely in the military in World War I, the dog became very popular throughout America. However, after World War II there was a lot of anti-German sentiment and its popularity began to decline.

However, the dog has innate characteristics of loyalty, a balanced temperament and it is exceptionally strong and large. With a good work ethic it was soon renamed the American Shepherd or the Alsatian dog to negate the association with Nazi Germany.

Following this it has become by far one of the most popular dogs in the United States and other parts of the world. As cop dogs the German Shepherd serves many purposes. In order to restrain criminals or controlling the public it uses its bark and hold technique to instill fear in disorderly crowds. Apart from this it has been trained as a search and rescue dog. The dogs are treated with great respect and are provided with bulletproof vests to guard them. It is considered a felony injure or kill German Shepherd cop dogs.