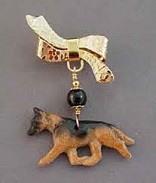 Can’t take your dog with you? Why not wear something that will remind you of your pet while you’re away? Read on for more information about German Shepherd jewelry…

The Popularity of German Shepherds

German Shepherds first became popular in the west after World War I. Soldiers who had been serving in Germany had seen the dog and were impressed by it. The TV show, Rin Tin Tin, starring a German Shepherd, also premiered around that time. Unfortunately, the breed became less popular during World War II, as Americans and Britons shunned anything “German”. The war did not affect the popularity of the breed for long, however, and by 1993, German Shepherds were ranked third in American popularity polls. By 2009, they had moved up to second place. This is probably due to the German Shepherd’s relative health, noble appearance, strong and agile body, and their generally friendly demeanour. Who wouldn’t love a dog with all of those great traits and qualities? German Shepherds are also easy to train and do uncommonly well in American Kennel dog shows. Their reputation as work dogs is almost unparalleled. From ranching to police work, these dogs do it all!

Because the breed is so popular and so loved by those who own them, there are many artists today creating jewelry depicting German Shepherds for any type of jewelry you could want; from bracelet charms to necklace pendants to rings, pins, earrings, ankle bracelets, earrings, money clips, key chains, cufflinks, and tie clips. All of these types of jewelry are available for you to show off the love you have for your pet and the enthusiasm you have for the breed. The different types of jewelry are made from many different materials, depending on the look and price range you’re seeking. You can get jewelry made from gold, silver, or platinum, as well as many other materials. There are also many different poses to choose from. Popular choices feature just German Shepherd’s head either looking straight at you or to the side, or the whole animal sitting, lying, standing, running, or even jumping. Some pieces of German Shepherd jewelry also include shapes being placed around the dog, such as a heart or hoop. Other pieces have wings attached growing out of the dog’s side to show what a little angel they are.

You can even get a charm bracelet of all German Shepherds that show them in a variety of head and body styles. If you want, you can even some pieces of jewelry specially made or engraved with your pet’s name on it. Another idea to make your jewelry more personal to you and your dog is to get a German Shepherd shaped locket and place a picture of your pet inside. That way, they’ll always be with you wherever you go.  With so many types of German Shepherd jewelry available, I’m sure you’ll be able to find something that you like.