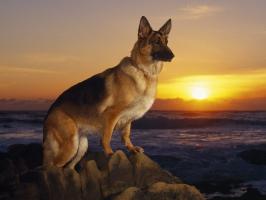 There are different dog breeds which have a mixture of lupine and Shepherd dog characteristics. This is generally prevalent in different kinds of dogs and is not specifically because of the genetic makeup or lineage to the dog. There are many dogs that have wolf ancestry and share some common characteristics. These pertain to their trainability, morphology and their intelligence.

The basic variety of the German shepherd is resplendent in its traditional short hair which is black and tan in color but many different color and coat varieties exist for this breed of dog. These are other Shepherd dogs and just like the German Shepherd they can be traced back to the same ancient Continental Shepherd dog from which the German, Belgian and Dutch shepherd dog is derived.

Even though the genetic makeup is different there are four specific kinds of wolf dog hybrids.  Known as the Czechoslovakian wolf dog, the Saarloos Wolfdog and Lupo Italiano along with the experimental American Tundra Shepherd all have traces of German Shepherd bloodlines. They end up displaying the characteristics of the German Shepherd and the wolf in different degrees. However, they are larger in size when compared to the animal they were bred from, and this is an excepted trait.

Breeding Program Started By The Dutch

The recognized program was started by the Dutch and was followed by dependent programs by the Slovakian and American dog breeders. The first two breeds were intentional crosses created by the crossbreeding of German Shepherd dog and the European wolf or Canis lupus. The American German Shepherd and the Alaskan Tundra wolf were crossbred to get the American tundra Shepherd.

The American tundra Shepherd is a very strong willed and well built dog with a lot of energy and intelligence. The intentional crossbreeding of the Lupo italiano was created between the female wolf hailing from the Latium area in Italy and the pure stock of German shepherd dog.

These are perfect as rescue dogs because they are exceptionally courageous and have a very keen sense of smell. The intention of the breeding programs was to improve the strength and stamina, as well as to get the Wolf characteristic of its sense of smell and sharp hearing. The aim of this cross breeding program was to create stronger dogs which did not have genetic diseases associated with basic domestic dogs along with inculcating the keen sense of smell and hearing of the Wolf. By crossbreeding it with the trainable German Shepherd the Wolf dog was actually more domesticated and manageable.