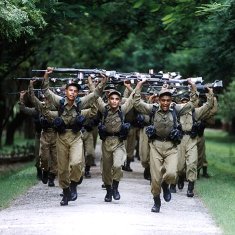 Are you interested in weapons of the Indian army? Do you want to know what rifles, armour and vehicles are used by the soldiers of the Indian military? Read our guide for facts and information…

The Indian army is the world’s second largest army. It has a myriad of weapons from light weapons like the Heckler & Koch MP5 sub machine guns, AK-47, Glock 17 9 mm pistols, ballistic missiles and even nuclear warheads. The highest military designation is that of the Field Marshall. But this is a largely ceremonial designation that has so far only been held by the Late General KM Cariappa and the Late Gen Maneskshaw. The central command of the Indian army lies in the hands of the Chief of Army Staff of the Indian Army that sits at New Delhi.

The projectile launchers include RPG-7 and SHIPON rocket launchers and AGS Plamya 30 mm automatic grenade launcher. The Indian army also possesses an impressive and indigenously made anti-tank guided missile system that includes the NAG; a third generation fire and forget IIR guided ATGM. They also have the 9M113, 9M111, 9M14 and 9M119.

The armored vehicles owned by the Indian army are made up of two categories the armored fighting vehicles and the battle tanks. Apart from these combat vehicles; other vehicles are used for logistics and as ambulances.

The battle tanks they posses are Arjun MBT Mk1, the T-90S Bhishma, the T-72 M1 AAmirtanks and the Vijayanta. The armored vehicles owned by the army include the BMP-1 which is now being phased out and the BMP-2 and its upgraded version the BMP-2M. They also posses numerous multiple rocket launchers like the Pinaka MBRL the BM-21 and the Smerch 9K58 MBRL.

Additionally  the Indian army also boasts of several indigenously developed surface to surface missiles like the BrahMos, Prithvi1 and the Agni.

India has also made considerable progress in the development of nuclear weapons but the country maintains a no first use and non-use against non-nuclear nations policy.