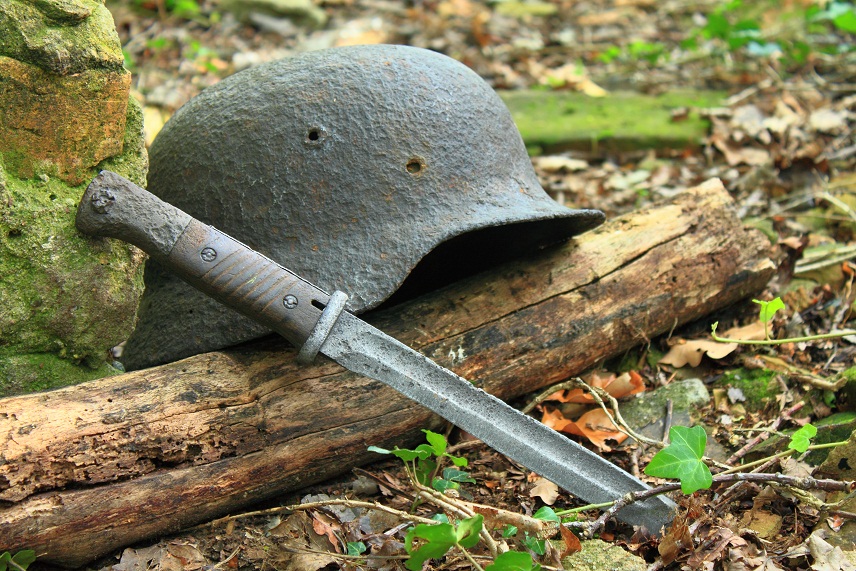 There are special commemorative and combat World War II German daggers. One such piece is the German SS World War II RZM Dagger. This is one of the SS daggers that have a black enamel scabbard on it. The blade of this dagger is maker marked on the reverse side. The front side has the basic etching that is evident on all SS daggers and states “Meine Ehre heißt Treue” in a deeply etched German font. The grip is made out of black wood and shows a few signs of wear that have occurred due to the routine handling of the dagger. Interestingly enough it is considered near mint condition because the black scabbard itself has minor signs of wear and the finish is almost as good as new. Even the tarnish on the dagger fittings is minor so it can be classified as near mint condition. There are a few wood indentations on the grip that can actually be removed but are untouched to show the originality and authenticity of the dagger.

Right after the World War II, the German Fire Chief Eichkorn dagger, which is also maker marked, was issued. It is classified as a Fire Chief Senior German Dagger. This dagger has a very finely etched double-sided fancy blade with engraving on it and still carries the original scabbard. The basic signs of wear and usage are still evident on the leather grip. The dagger is considered a basic specimen of the German firefighting division and has its own stand of arms. The stand of arms includes ladders, hooks, horns and helmets along with other apparatus and equipment. This scabbard and the dagger are considered in excellent condition.

The German Luftwaffe First Model Aviator Officer Dagger complete with hangers dates back to World War II. Considered the first model Luftwaffe Officer Chained Dagger, this dagger is complete with the scabbard and belt hanger. It shows very minor scratches that have occurred from routine usage. The leather grip has evident signs of routine wear on it, as well as a few scratches on the pommel and hilt. Interestingly enough the gilt polish on the swastikas is approximately 99% mint and looks stunning. The blade carries very slight marks from being extracted and returned to the scabbard but is otherwise in mint condition. The scabbard itself is in near excellent condition and shows very few signs of wear that have occurred due to the routine handling. The area near the drag has a slight rub in the leather.

The original belt hanger is also available in slightly used condition. There are minor signs of usage and field carrying evident on the hanger. There are triple wire wraps on the top that are slightly loose, but it is in tact and complete. The maker markings from GES GESCH are evident on the aluminum chain hanger, while the name of maker Eichkorn SOLINGEN is evident on the blade.