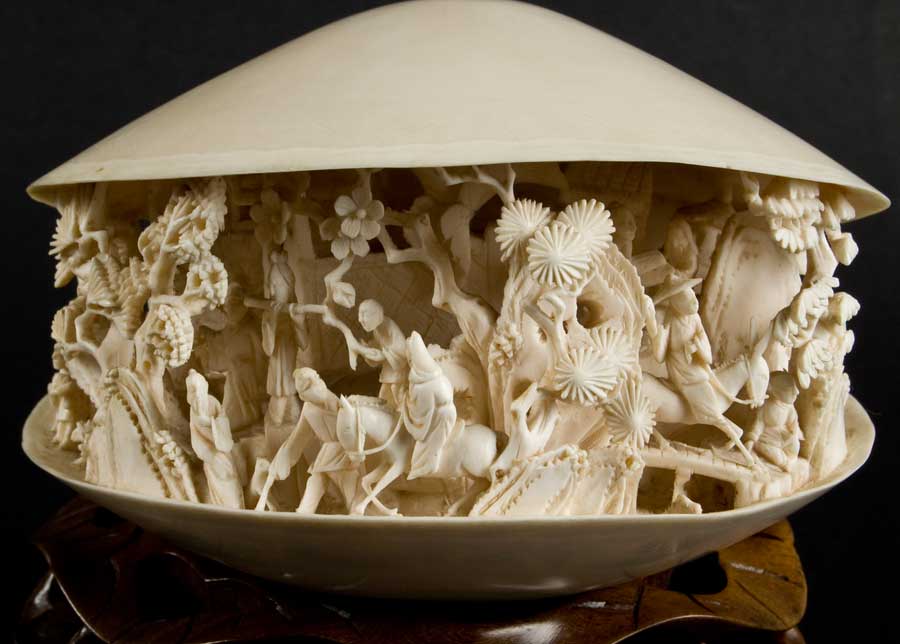 Want to but some Ivory art from China? Get an insight into Chinese ivory art that has existed for ages and is today attracting a great deal of attention.

As an art form carving has been present in China for thousands of years. It has held great importance for the Chinese through the ages. The art form can be broadly categorized into bamboo carving, wood carving and ivory carving. Ivory carving is by far the most highly revered and best known form of carving to have originated from China.

The Chinese made use of ivory obtained from the tusk of elephants as well as the ivory that they could get from narwhals and walruses. The building material has a unique milk white all natural color to it and is as such considered to be a very beautiful material. Ivory has a smooth feel to it on top of an amazing sheen. Weathering has a profound effect on the color of ivory which actually adds on value to the carving rather than depreciating its value.

The earliest records of ivory carvings from China date back to over two thousand years. But it was not until the opening of the Silk Road some two thousand years ago that ivory art truly began to flourish. This is because now the Chinese were receiving ivory in great quantities from Africa which increased the availability of the material for the artists who then worked their wonders in ivory.

Luckily many ivory art pieces have managed to survive the test of time and can be found displayed in museums in the country. The antique ivory art work displays the amazing skill of the Chinese artists that worked intricate details upon the medium.

The genuine works of ivory art from China are invaluable pieces of art. There is however a sad side to the story that has to do with forgery of Chinese ivory art. Furthermore ivory had become quite scarce towards the later years which led to many criminal activities that revolved around obtaining ivory and ivory art work.

The criminal practices also included making use of fake ivory and passing it on as the real thing. Animal bones along with other materials were used for this purpose. The malpractice artists would also age new ivory to give it the old touch and thereby seek to make an unlawful profit.

Many fraudulent sellers have actually managed to do all of the above while adding the master’s signature and selling the item off as an original.
The increase in ivory art scams came about after China accepted UN’s decision to ban ivory imports. In 1991 China banned ivory imports into the country. Individuals interested in obtaining Chinese ivory art need to make sure they know how to judge between what is real and what is being made to pass off as real in order to get their value for money.

From the Humudu culture that existed some seven thousand years ago in China, ivory art has seen many years through which it reached new heights. With time Chinese ivory art has developed into a sophisticated discipline that is sought after by art lovers today.