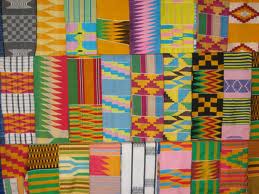 Kente is a type of cotton and silk fabric that is made by interweaving cloth strips. Native to the Akan ethnic group of south Ghana, kente originated in the Ashanti Kingdom, but has today been adopted by the people of other countries in West Africa.

The various colours in the kente cloth symbolise various aspects of life. Blue represents peace, love and harmony, while gold was mostly worn by kings in ancient times as a symbol of royalty, esteemed status, power, holiness and spiritual purity. Gold was also worn by the high priests of ancient times. Purple and pink were colours associated with women. Grey and white were symbols of holiness, healing, sanctification and cleansing rituals, and were worn mostly by priests and holy people. Black represents maturity and intensified spiritual energy. Green symbolises vegetation, growth and spiritual renewal. Maroon was associated with healing, while red reflected spiritual and political moods, death, bloodshed and sacrificial rites. Silver stands for purity, joy and serenity; while yellow is a symbol of wealth, royalty, fertility and preciousness.

Associated with royalty and the divine, kente cloth fabric was originally reserved for kings, and to be worn during special ceremonies and occasions. Kente is still worn only during important events in Ghana today, although anyone who can afford it is today free to adorn themselves with kente. Even with its widespread usage, Kente is still held in high esteem among the Akan people and Ghanaians in general.

Kente is available in a range of attractive designs to choose from. For instance, Adweneasa kente is created by weaving weft designs into each available block of plain weave. As one of the most widely known and sought after fabrics in the whole of Africa, kente is more than just clothing. For Ghanaians, kente represents their history, oral literature, philosophy, political thought, religious beliefs, and aesthetic principles of life.

Today, kente fabric is commonly used in making graduation stoles in a variety of colours, styles and patterns. It is possible to have your own custom stole made out of kente, by choosing your own style, colour palette and lettering. Kente graduation stoles are hand-crafted by skilled weavers from Ghana for use both by domestic and foreign graduates.

Kente is today recognised by its dazzling bright multicoloured patterns, bold designs and geometric shapes and motifs. Kente is popular not only because of its beauty, but also for the symbolic significance of its motifs. Each cloth has its own unique name and meaning as reflected by motifs representing historical events, proverbs, individual achievements, oral literature, philosophical ideas, moral values, human behaviour and many more.

Over time, many different patterns were invented for the kente cloth to be worn on different occasions. The Obaakofoo Mmu Man pattern is a symbol of democratic rule, while the Emaa Da represents novel creativity as well as knowledge gained from experience. The Sika Fre Mogya is a symbol of responsibility to share monetary success with one’s relations. The kente cloth patterns were used to showcase the kind heartedness and good nature of the people of Ghana.

Kente quilting involves stitching 3 layers of kente quilt sandwich together in order to form a decorative piece of fabric. Quilting with kente can be performed either by hand or machine. This method of fabric production is varied in technique, design, colour and pattern. Motifs such as those used in adinkra kente designs can be used to produce plenty of attractive images.

Kente was originally used only by kings. In ancient times, kente was regarded as the sacred and royal cloth of the Akan that would only be worn in times of extreme importance. However, kente is today used more widely, although the fabric remains of high esteem and importance amongst the Akan. Some of the modern day uses of kente cloth include: Bags, Bucket Hats, Dress, Headbands, Jacket, Jumpsuit, Jewellery, Pants, Robe, Rugs, Shoes, Upholstery, Vest and Wedding Dress.

Kente is known as Nwentoma in Akan language which means “woven cloth”. Kente is woven on a special kente loom which involves sitting inside the loom with your abdomen right up against the front beam. The weaver then pressed down on the treadle with their foot in a motion similar to treading a spinning wheel. Kente weaving is primarily done amongst the Ashanti and Ewe ethnic groups of Ghana. The weaving styles of the two groups vary slightly with the Ewe using two pairs of shafts to produce the plain weave. Nevertheless, the techniques used to weave kente in Ghana are relatively basic and easy to learn in a day or two if you are an experienced weaver.

Kente cloth originated in Bonoman, the ancient empire of the Akan people. Legend has it that kente was invented by two Akan friends who, while hunting in an Asanteman forest, came across a spider weaving its web. For two days, the friends stood and watched the spider and then returned home to implement what they had witnessed, gifting us with the beautiful fabric that is kente.