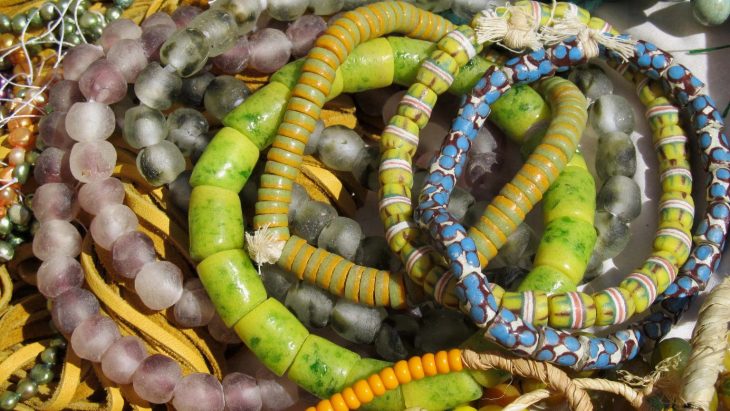 Ghana boasts being home to Africa’s largest bead markets, with Ghanaian beads enjoying a long history in the West African country. Beads were once a form of currency in Ghana used to purchase various types of goods including alcohol and textiles.

Because of their use in trading, Ghanaian beads today originate from various places including the ancient and modern trade routes of Europe, Asia and the Middle East.

Beads Around the Waist Meaning

It is common for women in Ghana to wear waist beads as ornaments, as well as for symbolic adornment, which serves as a sign of wealth, femininity or aristocracy, as well as spiritual well being. During Ghanaian naming ceremonies, babies are typically adorned with waist beads, while young adults also wear beads around their waists and on their hips during puberty rites as a portrayal of femininity. These beads are believed to possess the power to attract as well as evoke deep emotional responses.

As part of Ghanaian tradition, a successful suitor would commission a set of beads including bracelets, anklets, necklaces, cuffs and waist beads for his bride. This was part of her dowry and the foundation of her personal wealth. Women in Ghana would wear multiple strings of beads around their waist, with some cultures providing that the only person allowed to remove them was her husband on their wedding night. Some waist beads were adorned with bells which served as a signal to her partner that the woman was at a stage where sexual intercourse was permitted.

The inaccessibility of mineral metals for bead production forced Ghanaian artisans to be much more resourceful with regards to the production of brass beads. In this way, bead makers have adopted recycling practices similar to those that have caused an explosion in the glass bead industry.

The brass used in bead making is commonly sourced from throwaway metals from big industrial companies, as well as everyday functional items such as padlocks and locks.

Brass beads in Ghana are produced through the “lost wax” brass process, an ancient technique that was used for the creation of brass sculptures and models. This technique dates back to 9th century Nigeria and was used by the Asante people of Ghana for purposes of mending the bones of ancestors that were considered sacred, as well as for the creation of popular gold ornaments.

Today, this technique is synonymous with the production of brass beads. The casting of brass beads is a delicate process that requires the creation of a handmade mould. This is a task that requires exception skill and attention to detail. Only after a mould is made to serve as a template can the metalwork begin. Whether you purchase your Ghana brass beads as a string or loose family collection, you can never get identical beads due to the unique handmade moulds.

Krobo powder glass beads are just some of the traditional varieties of beads that are locally produced in Ghana.  Made from recycled glass, Krobo beads derive their name from the fact that artisans residing in the Krobo mountains area contribute to a large quantity of the powdered glass beads production. In fact, the bead making craft in the Krobo region of Ghana has been passed down through the generations. The Ashanti people of the Kumasi region in Ghana also produce Krobo beads.

Beads have played an important role in traditional Krobo culture for a long time, with their uses including festivals and ceremonies such as birth, coming of age rituals, marriage and death.

For instance, during the Dipo coming of age ritual, girls will typically adorn a large quantity of beads and perform special dances. Krobo beads are also adorned by African chiefs and community leaders as a symbol of status.

Every type of bead has its own process that creates the effect that the bead maker desires.

For instance, the powder glass beads are made out of bottles that have been smashed and ground into a broad spectrum of colors. Other beads are made using little rough pieces of glass derived from crushed bottles, although these are not made as fine as that used in powder glass beads production. Another bead style involves the use of a single piece of glass cut to the same size.

Two important instruments for the bead making process are the mould and the firewood kiln. The mould is what will determine the ultimate shape of the bead, while the kiln is what is used to fire the mould to create the desired bead.

The traditional kiln used in Krobo bead production is made out termite mound clay, and heated using palm kernels. The recycled glass bottles are typically crushed and ground using a heavy meaty pole and mortar.

Some of the tools and supplies used in the Krobo bead making process include:

The bead making industry of Ghana is very much alive and kicking. In addition to producing wonderful beads, bead making in Ghana is a role model for recycling and sustainability, by offering attractive beads made from recycled glass, metal and even paper.

Ghana beads may be purchased from craft shops and markets throughout the country, as well as from overseas African craft stores. If you ever get the chance, be sure to pay a visit to a bead making factory in Ghana where you will be able to watch the entire bead making process.