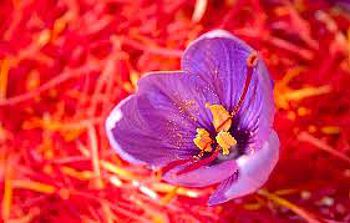 Saffron, the red-orange stigma of an ornamental plant, is the world’s most expensive spice with a remarkable history of healing in Persian herbal medicine. Read our guide for more facts and information on this exotic spice…

Saffron has a long history of healing and medicinal use in the treatment of several illnesses, including digestive disorders, depression, inflammation, chronic diarrhea and menopausal issues, among others.

Modern medical discoveries show that saffron could have anti-carcinogenic, antioxidant and anti-mutagenic capabilities in addition to its time-tested remedial properties.

History of Saffron in Persia

Persians introduced saffron to the Greeks and Chinese. In ancient Persia, saffron was even interweaved in royal carpets and funeral shrouds and used in ritual offerings to divinities. Saffron yellow shoes were renowned among Persian kings. Saffron is still used to dye Buddhist robes and bride’s veils in certain countries. It has versatile medicinal uses to the extent that non-Persians of those days feared the usage of saffron as an aphrodisiac and drugging agent.

Saffron is derived from the flowers of a plant called Crocus sativus, an ornamental plant with purple flowers. It is obtained by drying the red-orange stigmas – the female reproductive structures – of the flowers.  The flowers are hand-picked when in full bloom during autumn to make saffron. It takes 70,000 to 250,000 flowers to yield one pound of saffron.

Each flower has three stigmas, the thread-like structures containing the unique chemical composition responsible for saffron’s penetrating aroma, flavor and dye. The threads must be steeped to release the chemicals. Powdered saffron is considered to be more efficient as it can be used without steeping.

It is virtually impossible to duplicate the color, aroma and flavor of saffron. Saffron is mainly used to dye fabrics and season food, though much of its use pertains to medicinal applications. Its use in dyes, drugs, perfumes and culinary products dates back to ancient Egypt and Rome. In ancient Egypt, the wealthy used saffron in body washes and perfumes. It is said that Cleopatra used concoctions of saffron, myrrh and base oils to make fragrances. It was also used to stimulate sensory reactions.

Persian saffron, better known as Red Gold, is globally renowned for its quality, fragrance and coloring strength. It is sold in the form of threads or as a powder. Saffron is also used in tincture form. Liquefied saffron is common in Persian dishes, including rice, desserts and tea. It imparts the unique and subtle flavor to Persian food.

The earliest use of saffron was almost entirely medicinal due to its capability to treat a broad range of ailments. A cup of saffron tea, a Persian herbal medicine formula, is said to boost emotional health and appease anxiety. Ancient Egyptians used its anti-inflammatory properties to treat eye inflammations and reduce retinal stress. Saffron and sandalwood dissolved in water served as a body wash after heavy physical activity. Saffron sprinkled in bath water was believed to cure wounds.

Saffron contains an essential oil called safranal, which has sedative properties, meaning that it acts on the nervous system, serving as a tonic and analgesic. Safranal and crocin present in saffron have anti-depressant properties, which serve as mood elevators and improve mental health by increasing serotonin levels in the human brain. A chemical called picrocrocin makes saffron an aphrodisiac capable of treating erectile dysfunction and low libido.

Herbal preparations of saffron can be used as a carminative (prevent gas in the intestinal tract), diaphoretic (induce perspiration to eliminate toxins and cool the body) and emmenagogue (stimulate blood flow in the pelvic area and uterus).

Tea or milk with saffron is said to relieve women’s painful periods. Saffron mixed in hot drinks soothes cough and relieves cold. It can be used in massages to relieve gum pain. Mixed with glycerin, it can relax tense areas in the body. Saffron is rich in Vitamin B12 and contains carotenoids called crocetins. The pigments are known to stimulate digestion.

Saffron, whether in the powered or thread form, must be used in reasonable quantities as large doses could produce negative effects, such as sleepiness. The recommended dose of saffron is 0.01g to 0.02g per person. Mixing 0.5g to 1g of saffron in one liter of water could result in the right dosage. Dosages greater than 10g could be dangerous.

Due to the painstaking labor involved in harvesting saffron, it is one of the world’s most expensive spices. However, minute quantities of saffron can divulge a rich aroma and color, regardless of the purpose.

Iran 0 6
Want to know the difference between Hand-knotted Persian carpets and factory made Persian rugs?