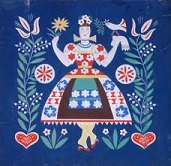 Are you going on holiday to Hungary? Would you like to appreciate some of the fine Hungarian art? Our guide to art in Hungary gives you the facts & information you’ll want to know.

There is a plethora of art to be seen in Hungary today that caters for a diversity of tastes. Be it traditional or modern, religious or secular, Hungarian of foreign, there are plenty of art museums in Budapest and across the country with fantastic displays of art. Hungarians are a very well educated and cultured people with an appreciation for art which means at any one time there will always be a vibrant art scene in Hungary that often incorporates influences from elsewhere in Europe, while at the same time adding a resonance that is distinctly Hungarian.

Hungarian ceramic arts and pottery are an excellent example of purely Hungarian traditional arts. The Great Plain of Hungary, which is the place to go to learn horse riding in Hungary, is located in the centre and east of the country has traditionally been the home and centre for production of this type of Hungarian art.

The art of Hungarian embroidery

Hungarian embroidery is another well established traditional art form that comprises part of the artistic heritage of Hungary. This type of Hungarian art is mostly practised among the Paloc people from the northern uplands in Hungary, as well as the Mato who come from Kalocsa and Mezokovesd.

Hungary has been a Christian country for about 1000 years with very close ties to the Vatican and Catholicism which is identified with Italy. This has meant that throughout the ages those artistic influences that were found in Christian art in Italy would often be adopted in Hungarian Christian art. Today there are dozens of churches across Hungary which provide excellent examples of gothic, renaissance and baroque art.