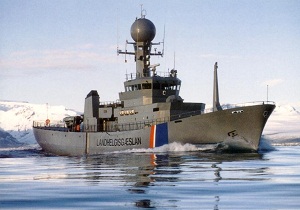 The Cod War in Iceland was initiated in 1972. The following article gives an overview of this extraordinary event in Icelandic history.

The three Icelandic Cod Wars that took place in 1958, 1973 and 1975 were precipitated by concerns on the part of Iceland that the stocks of Cod fish were being seriously depleted by over fishing.

With few natural Icelandic resources such as timber, agriculture, fuel or mineral deposits, Iceland relies heavily upon it’s stocks of Cod fish and the Cod Wars have been a vital element in protecting this industry.

In 1958 the first Icelandic Cod War took place after they extended their fishing limits from 4 miles to 12 miles off Iceland’s coast.

In 1972 Iceland further extended their limits to a 50 mile radius which prompted a hostile response from other nations, not least Britain, and the second Icelandic Cod War took place.

An agreement was reached in 1973, resolving the second Icelandic Cod War when Britain agreed to limit fishing for Cod to designated areas within the 50 mile radius.

What further instigated the third Icelandic Cod War, apart from the expiration of the agreement made at the end of the second Cod War, was Iceland’s move to extend the 50 mile radius to 200 miles.

Iceland argued that the United Nations stance on the law of the sea, with International support mooted in meetings during 1974, agreed there should be a 200 mile coastal economic zone with a 12 mile limit on territorial waters.

The third Icelandic Cod War was precipitated because Britain refused to accept this decision and continued to fish within the 200 mile zone.

The battle raged for seven months and during this Icelandic Cod War Britain’s fishing trawlers were escorted by twenty two frigates (although at the most, only nine were to be deployed and any one time)

Of the three Icelandic Cod Wars, the third was the most threatening and during it’s course the Icelandic Coast Guards and the British fishing vessels rammed one another causing injuries and damage to boats.

After a particularly violent incident during the third Icelandic Cod War, the United Nations Security Council was approached but took no action. The Nordic Council announced their support for Iceland.

It was only when Iceland threatened, during the third Icelandic Cod War, that they would close the NATO base at Keflavik which would at that time have had major implications for world peace, that matters took a turn.

The American’s offered to mediate, but it was Dr. Joseph Luns, the Secretary General of NATO who interceded and helped to bring the third Icelandic Cod War to a conclusion on June 2nd 1976. It was agreed that only 24 British vessels would be allowed in the 200 mile zone and four conservation areas would be completely closed to the British. It was further agreed that the Icelandic Coast Guard following the Cod War would have the right to stop and search any vessel thought to be infringing the agreement.