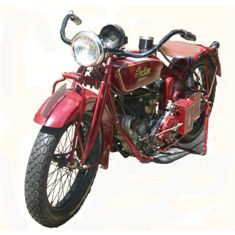 The year 1927 saw the production of the first all-talking motion picture, The Jazz Singer, starring Al Jolson. It was also the year Charles Lindbergh reached Paris after his successful trans-Atlantic flight, and the year Babe Ruth hit his 60th home run in the 8th inning of a game between New York and Washington. The batter that came after Ruth in the line-up was a man by the name of Louis Gehrig.

Though farmers were having a tough year – tough enough that many of them sold out and became tenant farmers, America was at the peak of the Jazz Age in 1927. The Indian Motorcycle Company was having a fine year as well. Not only were its top models, the Scout and the Chief, selling well, the company also acquired the assets of the Ace Motorcycle Company. Ace’s top of the line bike was the four cylinder machine that Indian made for one year under the name “Indian Ace.” Afterwards, this big, luxurious bike would be called the Indian Four.

The Indian Four that started out as the Indian Ace evolved by 1941 into a 77 cubic inch (1,256 cc) four cylinder machine. It had a tank-shifting three speed transmission and was dressed up in the Indian skirted fenders. Indian made some in 1942, but with the start of World War II, production of the Indian Four stopped for good.

In 1927, however, America and the Indian Motorcycle Company were cruising along. Police departments were buying so many Indian Scouts and Chiefs that a production facility was made just to supply law enforcement. Indian Motorcycle Company was working in 1927 on a version of the Scout with a new lower frame. But they probably didn’t know just how important the 101 Scout from the year 1928 would be. And in 1927 they could hardly know that 40 years into the future an Indian motorcycle would set an Under-1000 cc speed record at the Bonneville Salt Flats in northwest Utah.

A 1927 Indian Motorcycle is a rare find today. The few specimens that have been lovingly restored to the beautiful machines they started out as can sell for as much as $30,000. Clearly, 1927 was a great year for the Indian Motorcycle Company.