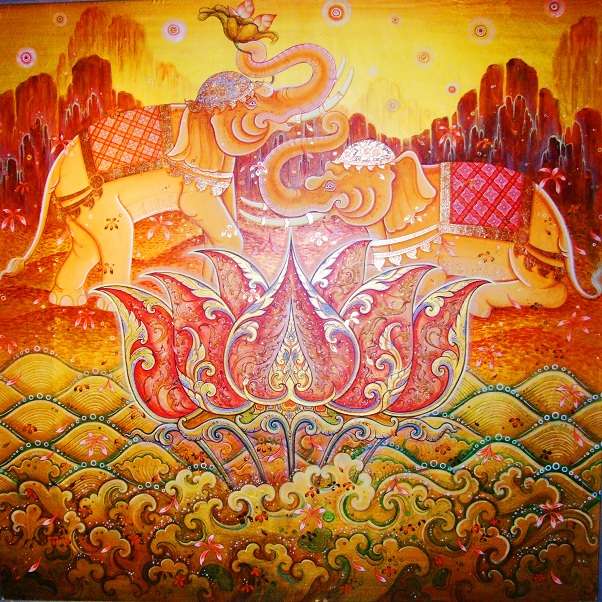 Traditional Indian visual arts include petroglyphs or etched and engraved stones dating from five thousand five hundred years ago. These gave way to stone statues carved by the Buddhists in caves and the sides of cliffs and boulders, an art form that was later appropriated by Hindus and Jains. A unique form of murals or large paintings on walls and ceilings was invented by the Buddhists two thousand years ago and Hindus from Kerala invented a fresco style to decorate the walls of their temples in the first millennium.

The Moguls imported miniature paintings from Persia and this was largely supplanted by oil based paintings introduced to the Indian sub-continent in the nineteenth century. We shall briefly look at some of the modern Indian painting schools and styles in this article.

The Bengal school of painting became popular during British rule in the early twentieth century. Although promoted by the British it became a symbol of Indian nationalism and independence. This was a reactionary movement to the traditional European painting style and its Indian implementations such as the adaptations of European academic styles to Indian mythological and legendary motifs by artists like Raja Ravi Varma. The school died out in the 1920s.

Jamini Roy was trained in European style oil painting and received his diploma in 1908. However, he rebelled against both the European and Bengal schools and started to draw inspiration from folk arts such as the Kalighat paintings with their broad majestic brush strokes. Not satisfied, he went to villages to learn from the traditional masters and over time developed his own style which some say is almost Egyptian in nature.

Francis Newton Souza founded the Bombay Progressive Artists Group to promote the international avant garde movement in Indian painting and later left for London in 1949 to become India’s first internationally recognized star. His autobiographical Nirvana of a Maggot not only helped increase his fame but through him modern Indian oil painting. Experts noted his unique painting style which was essentially Expressionist in nature but incorporated elements of post war British art movements.

Maqbool Fida Hussain born in 1915 has been India’s most prolific and internationally best selling modern painter for seven decades. He was one of the original members of the Bombay Progressive Artists Group founded by F. N. Souza and Syed Haider Raza. Other noted artists associated with the group have been Tyeb Mehta, Akbar Padamsee, and Sadanand Bakre.

Forbes magazine has called M. F. Hussain the Picasso of India and his first film in 1967, Through the Eyes of a Painter, won the Golden Bear award at the Berlin Film Festival. Paintings by M. F. Hussain have fetched as much as two million dollars at auction. Due to controversies arising from his nude portrayals of Hindu gods and goddesses and the ensuing death threats and legal actions, M. F. Hussain now lives in Dubai and London.