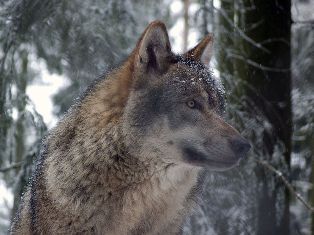 Are you interested to know more about the gray wolves which thrive in many parts of the world including India? Do you want to know about gray wolf’s behaviors, appearances, its life, and death? Then read our guide for more facts and information…

The Gray wolf, also known as timber wolf carries a scientific name Canis lupus and is a member of the Canidae family. Several genetic drift studies and DNA sequencing prove that these gray wolves are survivors from the Ice age, that is, from the Late Pleistocene which refers to the period almost 300,000 years ago; no doubt that gray wolves can be considered as one of the oldest species walking on the face of earth for many centuries. There is also research and reports claiming that the gray wolf has strong genetic relations with domestic dogs. There are innumerable subspecies of the gray wolf and they are adaptable to varied surroundings such as mountains, forests, tundra, deserts, grasslands, taiga, and even in the urban areas.

The gray wolf can weigh anything between 55 lbs to 85 lbs while measuring a height of 0.6 to 0.95 meters depending on its species and origin. In general, the female gray wolves weigh almost 20% less than their male counterparts. They have less massive shoulders, smoother furred leg, and narrower muzzles. But all types of gray wolves have great stamina and powerful backs which make them run at a speed of 65 km/h during chases.

Social Structure and Communication Present in the Indian Gray Wolves

Wolves are usually found in packs except the young ones looking for new territory and the lone wolves which are chased from their packs. While 8 is the typical size of the wolf packs, it may vary from 2 to 20 wolves. There are several interesting concepts associated with the wolf packs such as the manner in which they hunt their prey, the way the wolf cubs are submissive to their parents till they reach sexual maturity, the fight for dominance among the packs, and the territorial behaviors of the gray wolves. The scent marking behavior of the gray wolves are worth discussing as there are several meanings left behind by the particular wolf. The wolves can use scent marks to define territory, authority, as landmarks, warning, or to indicate breeding.

The body language of the gray wolves is in fact very vast and enthralling. It has so many varieties ranging from communicating dominance, submission, anger, fear, suspicion, relaxation, playfulness, happiness, hunting, and more; howling is one of the most important means of communication among the gray wolves.

Dangers from Humans and Diseases

The human-wild conflicts are as high as ever before and at times, humans are at the receiving end as there have been rare cases when humans are killed by packs of gray wolves. Apart from this, the Indian gray wolves are susceptible to many diseases such as deerfly fever, foot-and-mouth disease, rabies, brucella, leptospirosis, and anthrax.