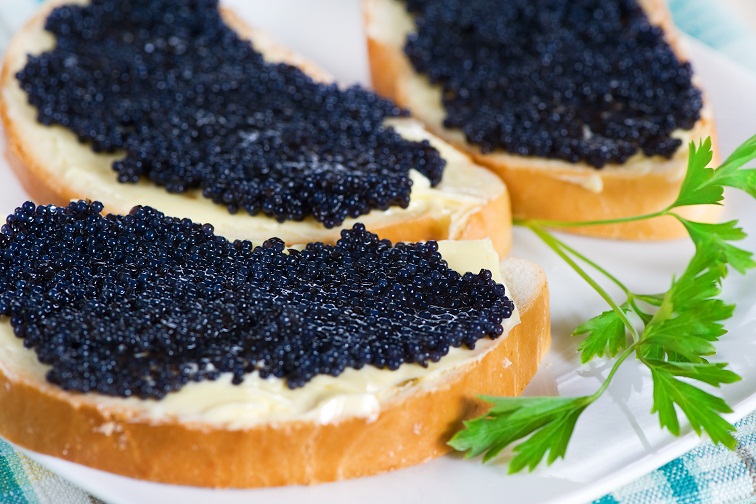 Black Russian Caviar Malossol is processed, salted and unfertilized roe of sturgeon fish, and history has recorded that it had been a vital food of the Czars of Russia, during the earlier centuries. Read our guide for more facts and info on Black Cav

Caviar refers to fish roe that is sieved for removing fatty membranes and tissues, and salted slightly for preservation. Malossol is a Russian term, literally translated as ‘little salt’, and it refers to the quantity of salt used in processing wherein less than five percent of salt is used, as lesser salt means better caviar.

The origin of caviar

The word caviar, which was incorporated into English print during 1591, is derived from ‘khavyar’, a Turkish word. Sturgeon fish had been a part of the diet in Eastern Europe and the Middle East since pre-historic times. True caviar refers to sturgeon roe alone; sturgeon is an anadromous fish that lives in saltwater, but moves to freshwater for spawning. Its home lies in the Black Sea and Caspian Sea between the continents of Asia and Europe, besides the Atlantic coasts and Pacific coasts of United States.

During the 19th century, when sturgeon was abundant in America’s waters, a German immigrant in America began exporting caviar to the European continent and many followed him, making US the largest caviar exporter. In that same period, much of the caviar shipped to Europe was labeled as ‘Russian caviar’ and sent back to the US. During the early 20th century, over-fishing of sturgeon increased its prices and much caviar had to be truly imported from Russia.

Caviar is predominantly taken from four varieties of sturgeon namely beluga, sevruga, sterlet and osetra, though salmon, tuna and lumpfish are also a source of caviar these days. Beluga caviar is found mainly in the Caspian Sea and is larger compared to other black caviar, ranging from black color to light grey. It has a smooth butter-like flavor. Sevruga roe is the smallest, mostly commonly found row, with a unique flavor comprising a natural salty taste.

Sterlet roe is the rarest among sturgeon roes and is the most expensive, as over-fishing has made sterlet fish a rare species. Osetra caviar is medium-sized, ranging from dark brown color to light grey, and at times golden in color. It is readily available at affordable prices and is preferred much, because of its nutty flavor.

In the Malossol method of processing, 5% or lesser salt is used for curing the roe, while the pasteurization method involves partial cooking for preservation, rendering a longer life. Pressed caviar is a combination of different roe types, salted and pressed to form a jam-like consistency. It is preferred by household chefs for less expensive dishes and its nutty flavor and condensed form.

Black Russian Caviar Malossol is traditionally served with minced onion, on butter-toast points, or more frequently as blinis, and occasionally on cream cheese. Caviar is high in both salt and cholesterol, though it is rich in Vitamin A and Vitamin D, and omega-3 fatty acids which according to researchers deters depression.

Russia
Russian hockey jerseys are known for their exceptional quality and smart designs. Read our