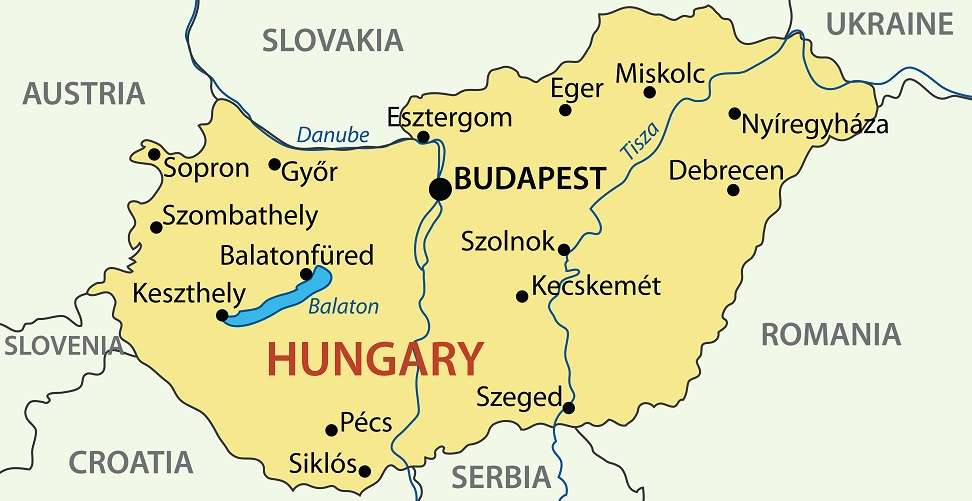 Are you going on holiday to Hungary? Would you like to know about the geography of Hungary? Our geographical guide to Hungary gives you a summary of the information you’ll want to know

Hungary is situated in the centre of Europe in what is known as the Carpathian basin. The total surface areas covered by Hungary is 93,000 km² making it one of the smaller countries in Europe.

Coastal geography of Hungary and borders

Hungary is one of the few countries in Europe with a geography that is completely landlocked, meaning it has no coast. The nearest geographically located sea from Hungary is the Aegean Sea located off the coast of Croatia. Hungary’s centrally located geography in Europe means it borders several other countries. Hungary has land borders with seven other European countries; Austria, Slovakia and Ukraine to the north, Croatia and Yugoslavia to the south, Romania to the east and Slovenia to the west.

Although Hungary isn’t a huge country geographically speaking, it does incorporate within its borders a reasonably diverse array of landscapes and the climate in Hungary can vary considerably as well. The mountainous and hilly areas in Hungary are to be found in the north of the country as well as hilly areas in Transdubia which are located in the west of Hungary. A great proportion of the geographical land mass of Hungary is taken up by the Great Plains located in central and eastern Hungary, where the lie of the land is generally low and flat.

The geography of Hungary is blessed with several rivers of considerable size, the largest of which is the River Danube which runs through the country from the north to the south splitting the capital of Budapest in two. The River Danube combined with Hungary’s other main river of Tisza stretch for over 1000km in Hungary alone.  Other significant rivers featuring on the geographical map of Hungary are the Raba and Drava located in the west and south west of the country. Hungary also has a vast number of lakes dotted around the country, the largest of which is Lake Balaton located in the centre west of Hungary. Lake Balaton is a popular place for camping in Hungary.