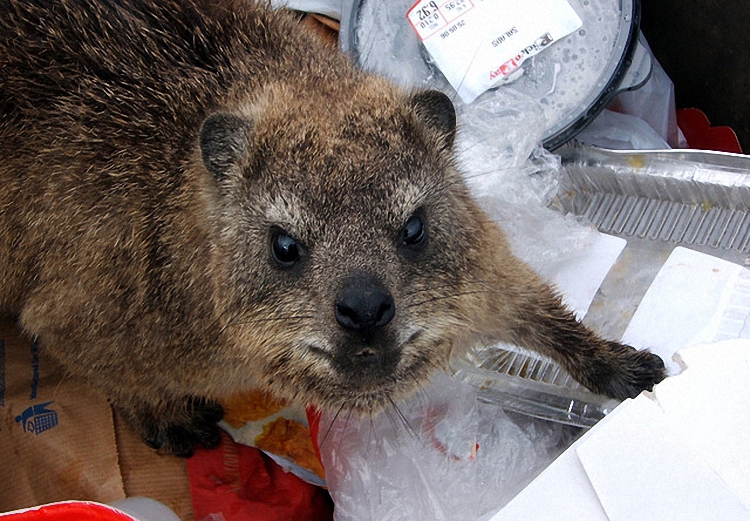 It gets it’s name due to the fact that it lives in rock crevices and holes and is known to spend large portions of the day stretched out on it’s back absorbing heat from the sun above and the rocks below.

Although virtually unknown outside of Africa, the Hyrax can commonly be found throughout most of Africa and even as far north as Palestine in the Middle East.

Although you’d never know it to look at a rock dassie, it is the closest living relative of the elephant, in addition to the aardvark and sea cow. The similarities between these unlikely cousins are best seen in the teeth, teats and testes.

Teats: Female rock dassies have two teats near their armpits, similar to the elephant that has them between her front legs. This is quite unusual as most mammals have them further down along their belly. The Dassie actually has 6 teats, four of which can be found on the belly.

Teeth: The Rock Dassie has two pointy fangs at the front of it’s mouth. This isn’t unusual as lots of animals have fangs; lions, tigers, leopards, cheetahs, wolves, dogs, cats, etc. However, what separates the dassie is that it’s pointy teeth are actually incisors (front teeth) and not canine teeth which lie between the front and back teeth. Elephant tusks are nothing more than super sized incisors!

Testes: Ever wondered why male elephants don’t have testicles?  They do, but theirs are tucked into their abdomen so we can’t see them, exactly like the cute little South African rock dassie. 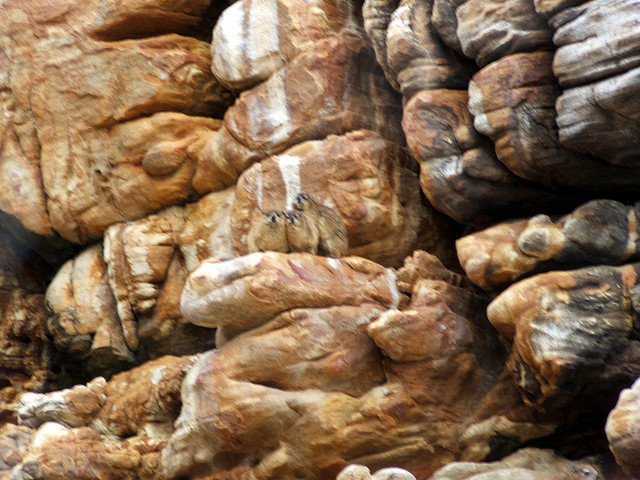 The South African Rock Dassie relies primarily on grass and leaves for it’s sustenance although it also eats fruits and berries when available. There are some reports of it eating small insects like Caterpillars or beetles but little scientific study has been done on this.

The Hyrax can be found in a variety of terrains over most of Africa, but as the name suggests, the South African rock dassie lives primarily in rocky, semi-arid terrains, where it gains protection from predators in and among rock crevices. They can be found living in most national parks in South Africa and are not hard at all to spot.

The rock dassie is commonly preyed upon by a variety of animals including pythons, leopards and eagles. Although not particularly fast or agile, they are equipped with a peculiar evolutionary mechanism that affords them some protection in the unfair game of life; The Dassie has a small shield in the retina of it’s eye allowing it to look directly into the sun. This is especially handy as predators such as eagles tend to swoop in with the sun behind them so as not to be seen.

Knowing they are vulnerable to the more genetically gifted, the Dassie takes precautionary measures to help it’s odds of survival. They tend to move and feed in packs with appointed sentries on the lookout at all times. They also stick close to their holes so they can run and cover when need be. When a predator is spotted, the sentry sounds the alarm with a high pitched shrill and back they scurry into their holes. 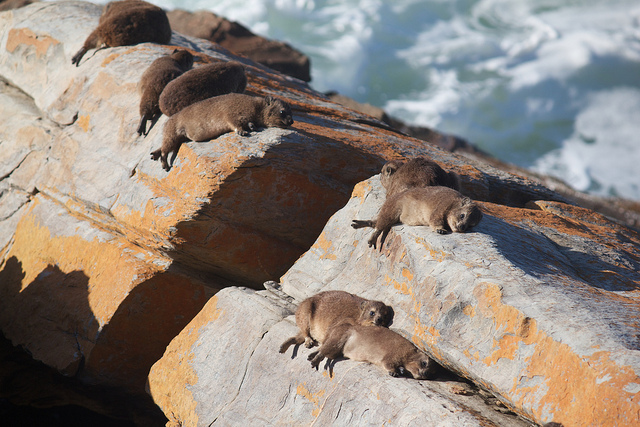 The Dassie has an unfair reputation for being a lazy animal. This is because it’s often spotted in it’s favourite pose of being stretched out on it’s back soaking up the sun’s rays. The reason it does this however, is due to it’s inability to regulate it’s own body temperature. They aren’t able to produce much body heat and need to be out in the sun alot to stay warm.

African legend has that when the lion was handing out tails to the other animals, the hyrax couldn’t be bothered and sent the monkey in his stead. The monkey decided to add the hyrax tail to it’s own ending up with a doubly long tail, while the dassie got nothing.

An interesting fact of surprisingly large significance is that Rock Dassies are very particular about where they go to the toilet. So much so that colonies are known to use the same spot for generations. These can either be down the side of rock faces where over time a cascading effect is etched onto the rocks, or in more shaded and protected holes where both feces and urine build up over time. This is a way of marking territory and warding off potential competitors; a very common practice in the animal kingdom.

However, this is no ordinary pile of crap; it’s actually very sweet, both on the nose and the wallet. Recent years have seen an upsurge in interest in Rock Dassie excrement due to it’s peculiar chemical composition, which has seen it used in both medicine and perfume making.

Although seemingly unusual, the use of animal urine for therapeutic purposes is far from unique. Both cow and human urine have been used for millenia in Indian ayurvedic medicine, and camel urine has long been used to treat a variety of ailments in the Arabian Peninsula.  In Sub-Saharan Africa Rock Dassie excrement features extensively in many traditional remedies for various disorders including skin and stomach upsets, but It is probably best known for it’s treatment of convulsions and epilepsy.

There hasn’t been much scientific study on the subject to date, but so far it seems that the Dassie dung shares properties similar to a group of chemicals called benzodiazepines (valium and xanax are two examples) which are used extensively for conditions including anxiety and convulsive disorders.  In Namibia Rock Dassie tea made from droppings has traditionally been used to brew a detoxifying tea. 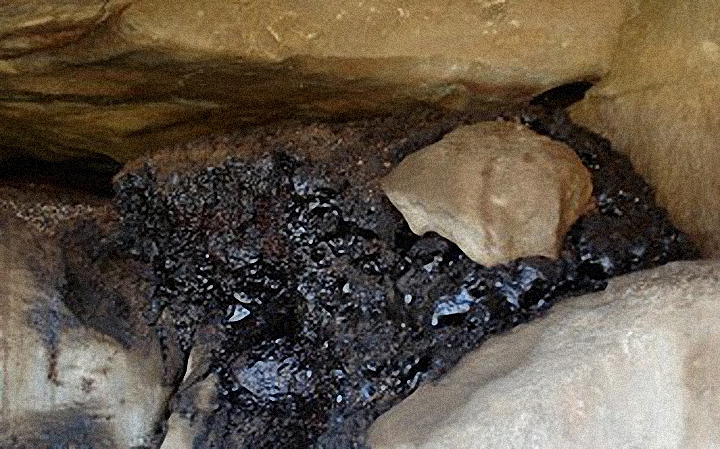 As if it’s medicinal properties weren’t amazing enough, South African Rock Dassie dung is becoming increasingly sought after by manufacturers of perfumes because of it’s unique smell. Also known as Hyraceum,Africa Stone or even Dassiepiss,  it is actually a fossilized mixture of rock dassie dung and urine that forms into a solidified resin. This resin is then either pulverized into a powder or soaked in alcohol for a few weeks to make a tincture.

The smell is likened to musk, and because the dung can be collected without harming the Dassies, it is seen as a more humane alternative to deer musk, which is collected from deer testicles. Unlike Rock Dassie tea which can make use of fresh droppings, only the resin can be used in perfumery.

Hyraceum takes at least several years to form, and some sellers claim they source only Dassiepiss that is several thousands of years old, although there is no definitive science on whether the age of the fossilized dung increases potency of smell or efficacy in healing. What is certain is that the dung is valuable with a 5 ml perfume bottle retailing for around $30.

South Africa 0 13
Need info on the temperate forest of South Africa? Learn more about the unique

South Africa 0 79
Interested in advantages and disadvantages of gold mining in South Africa? Learn more about