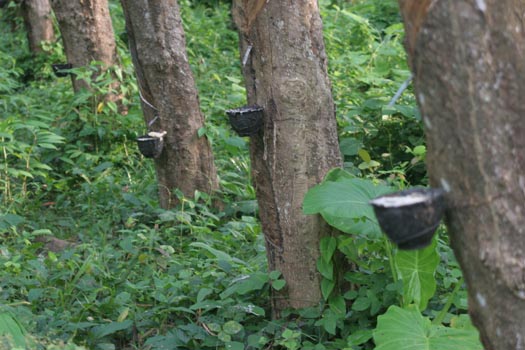 Thinking of buying a rubber tree plantation in Thailand? Want to know if there is any money in Rubber trees ? Our guide gives you the facts & information you want to know

Most trees look the same or very similar, that is because they are. They are no longer in the forest as they have been tamed and cultivated, their natural habitat, and the huge variety of the forest has been cut down for development. In Thailand, rubber trees were first planted in Trang, which is in the south of Thailand.

The very first tree still stands there, where it has been growing since 1898. Plantations have spread throughout Thailand, rapidly growing in number and now millions of hectares are planted with rubber trees. More than 80% of the plantations are in the southern regions.

Rubber trees grow best on flat low land, these areas, if left uncultivated, would have been mostly rainforest. Fifty years ago, 60% of Thailand was covered with forests, now it is less than 20%. The dramatic change has meant that Thailand’s forests have been swapped for cash, with rubber tree plantations now prevalent in Thailand.

Land that is used for rubber cultivation quickly suffers a rapid decline in the fertility of the soil. This is because growing one crop removes the same nutrients again and again from the earth. Until they are totally depleted and that crop can no longer be grown until, the nutrients are replaced.

After areas are cleared of forest ready for planting of rubber trees, but before they can be planted, soil erosion can often wipe out the life-giving topsoil.

In some extreme cases lives have been lost, as happened at a site that had been cleared for rubber trees in Thailand in 1988. In a village named Kireewong; landslides caused by a tropical downpour killed over 300 people and devastated the town of Nakhorn Si Thammarat. Simply because there were no trees to hold the ground together to prevent the landslides.

Tropical rainforests in Thailand offer great value in the area of tourism, where obviously rubber plantations offer no interest to visiting foreign tourists.

If you were to calculate the value of the rainforest to tourism in Thailand, it would work out as many millions of dollars every year.  Probably significantly more than is produced from the sale of products produced from the rubber plantations.

Ecotourism is the fastest-growing tourism sector in Thailand, and destroying rainforest to make way for rubber production produces little reward. Compared to the huge amount of tourist dollars flowing in Thailand every year from people who wish to visit the natural wonders the Thais have to offer their visitors.

Thailand
Thailand is a popular holiday destination for young backpackers, partly because of the multitude

Thailand
Are you going on holiday to Northern Thailand? There’s a good chance you’ll want