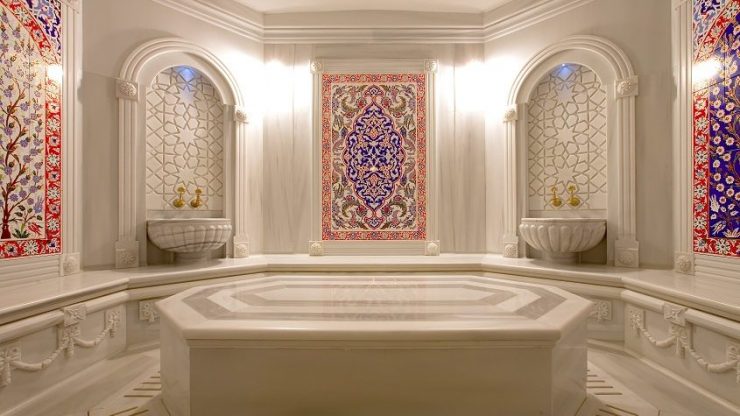 The reason Turkish baths became so popular in Turkey during these days was that Turkish people didn’t have facilities in their own houses so would go to the local public Turkish bath. People in Turkey in those days would view a visit to the Turkish bath as a day out and prepare picnics to take with them and eat after they have finished bathing.

Despite the fact that the majority of the population of Turkey have baths in their houses these days, the traditional Turkish bath is still as prevalent as ever. One can find Turkish baths in almost every neighbourhood of all the big towns and cities in Turkey.

There are three main stages to the Turkish bath in Turkey. Firstly when you enter you will be given a cubicle in which you take off your clothes and wear the loin cloth provided by the staff.

You should never take off this cloth and go naked in the Turkish bath as this is considered rude, although it’s quite acceptable to wash your privates from underneath the loin cloth. After changing you will be taken to the hot room of the Turkish bath in which you just relax and work up a sweat while your muscles loosen up.

If you want, there will be a member of staff in the Turkish bath who will give you a Turkish massage.

After the hot room you go to the warm room of the Turkish bath where you can either wash yourself or a staff member will scrub you down using Turkish soap and a special cloth that gets out all your old skin blocking your pores.

Once this has finished you are taken to the cool room and given lots of towels to wrap your self in. Here you can just relax and order some tea or any other drink that’s available. If you’re feeling tired you can even go back to your cubicle for a nap.

Almost all Turkish baths in Turkey either have separate sections or times for men and woman, although there are a few Turkish baths in the tourist areas that cater for both, although women should be advised that the staff inside these baths are nearly all male.

Turkey
Wondering about different things to do in KaramÃƒÆ’Ã‚Â¼rsel Turkey? Read ahead and discover different