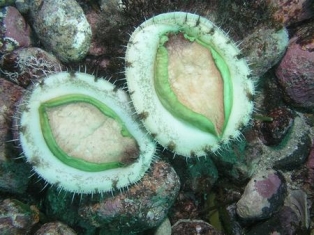 Looking for the New Zealand and Australia Abalone? Learn more about the Australian and New Zealand Abalone and its versatile uses as food and jewelry…

Available in different colors like green, red and black along with white the Australian and New Zealand Abalone offers a variety of possibilities. The name for this snail is actually derived from the Spanish word Abulón. There are only 100 recognized species in the world for this mollusk.

Characteristics of the Australian and New Zealand Abalone

The Australian and New Zealand abalones have shells with a very low and open-faced structure, which lies in the form of spirals. They have different respiratory pores that are exposed close to the outer edge of the shell. Mother-of-pearl, which is also known as nacre forms the interior layer and fills the inside of the abalones in a thick layer. In some of the species of the hundred available the recognized ones the shell is a very iridescent, and shimmers in different hues of color. These ranges of changing colors, which are very strong in nature, have made it very popular with humans and the shells are used to create attractive and shimmering jewelry and various decorative objects.
While the shell is used for crafting different items, the fleshy part known as the adductor muscle of the Australian and New Zealand abalones, is consumed by different gourmands. The shell actually resembles the human ear and is also known as the  ‘ear-shell by enthusiasts’.

The shimmering mother-of-pearl or nacre found in the interior can have color ranges from red to pink and silvery white to pink or a deep green-red, which is finished off with the Haliotis iris, which shows predominant shades of deep green, blue or purple.

Location of the New Zealand and Australian Abalone

Generally the abalone thrives in the cold waters of different oceans across the world. It is found in abundance in Australia and New Zealand. And many different items are crafted by the locals in those regions. Other areas include South Africa, the western coast of United States of America as well as Japan.

The resilient abalone shell is a very strong shell because of its low-lying structure and becomes very resilient and hardy as it ages. This means that very good quality jewelry and decorative items can be created to last for a virtually limitless time. The thriving piece of living shell that is harvested is actually a very natural item to wear on the human body. Based on research and scientific study there are many people who are trying to create body armor out of the strong and resilient shell.

Harvesting of the Abalone

The Australian and New Zealand abalone harvest yield constitutes about 25% of the total world quantity. However, there are strict international restrictions when it comes to harvesting the white abalone, because the population has depleted drastically and it is near extinction.